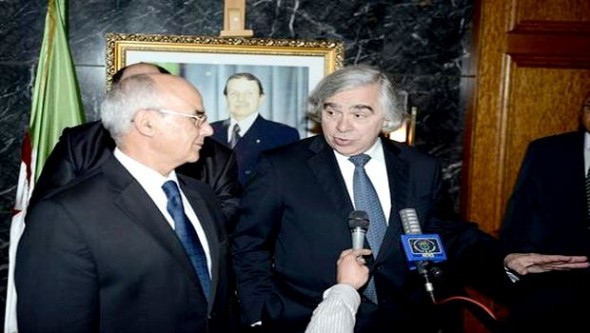 Algerian energy minister Youssef Youssfi has said his country is interested in shale oil and natural gas to enhance diversity of energy sector.
At a meeting in Algiers with U.S. Energy Secretary Ernest Moniz, Mr. Moncef said “Algeria is currently evaluating its potentials in shale oil & gas, is trying to determine the quality of the rock while studying all potential environmental impact”.
“It is absolutely vital for us to use all possible resources to achieve energy security”, he added, noting that the U.S. oil companies are making some success in the shale sector and looking forward into tapping the Algerian energy market.
Algerian national company Sonatrach, dominates the country’s hydrocarbon sector, owning about 80 pc of all hydrocarbon production.
However, Islamic militant groups operating in North Africa and the Sahel poise serious security threats to oil and gas installations in the region. In January 2013, an extremist group stormed Algeria’s In Amenas gas facility, resulting in several causalities and a temporary suspension of gas production.
Algeria, OPEC member, has 12.2 billion barrels of proven oil reserves. The government has offered lately fiscal incentives to foreign companies interested in the exploration offshore believed to contain unconventional resources.
Algeria has the 10th-largest natural gas deposits in the world and is a major gas supplier to Europe.