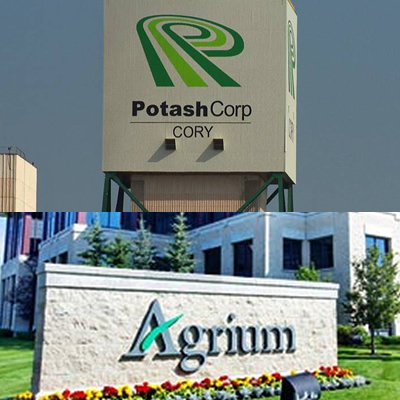 Potash Corporation of Saskatchewan and Agrium Inc. of Calgary are going to finalize their mutual merger, thus creating a global agricultural giant worth $36 billion. The regulatory review and approval process for the merger are still ongoing and the transaction is expected to be closed at the end of Q3 this year. Both companies announced that the new merging company’s name would be Nutrien. Nutrien’s headquarters will be based in Saskatoon and it will have offices in Calgary too.

The merger will bring together PotashCorp’s huge fertilizer mines with Agrium’s extensive global direct-to-farmer retail network. The new company will be the world’s number one producer of potash and number two producer of nitrogen fertilizer with operations in 18 countries, employing more than 20,000 around the world. Nutrien will be the global leader in reliable, low-cost crop nutrient production, combined with the world’s largest agricultural retail-distribution network.

Under the deal, PotashCorp’s shareholders would get 0.4 shares in the new firm for every PotashCorp share they own while Agrium shareholders would convert their share into 2.23 shares in the new company. At those ratios, Potash shareholders would own 52 percent of the new firm while Agrium owners would have 48-percent stake. “I look at the strategic fit and I look at combining the world’s largest fertilizer with the world’s largest agricultural retailer,” said Chuck Magro, the CEO of Agrium and the man who would have the same role at the new company. “That makes an awful lot of sense to me.”