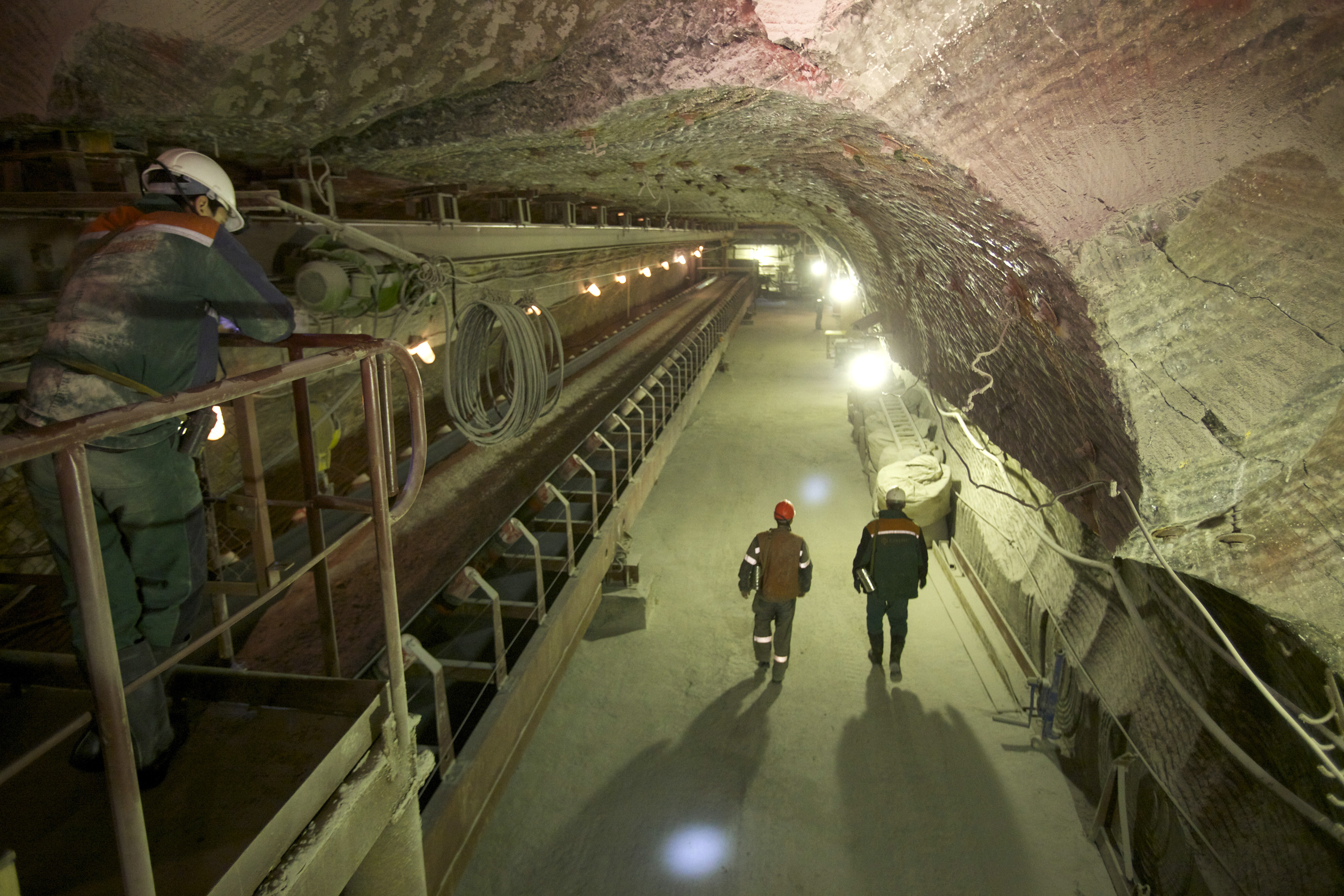 URALKALI, one of the leading global producers of potash, inaugurated in March 2020 a new potash mining and processing facility in Solikamsk, Russia. During construction, Penetron crystalline technology was applied to protect the exposed concrete structures from the harsh Russian climate. The construction comprised two mine shafts (almost 400 m/1320 ft deep), a processing plant, a vast conveyor belt system, a potash storage bunker, and a logistics building. Because of the extreme environmental conditions experienced in that region of Russia and the difficult geological conditions, the project engineers at Souz SV reached out to specialists at Penetron Perm, the regional Penetron distributor, to provide a waterproofing solution for the below-grade concrete components in the new buildings. “The use of PENETRON ADMIX provided a durable and permanent concrete waterproofing solution that will last for the lifetime of the concrete, even in the harsh environmental conditions found in Ural region of Russia,” said Igor Chernogolov, President of Penetron Russia. “It also helped Souz SV finish construction of the Solikamsk mine on time and minimises the need for any future maintenance for Uralkali.”
YARA INTERNATIONAL ASA, a Norwegian chemical company, has announced that the a shipment of fertilizer has sat sail from its production facility in Porsgrunn, Norway towards East Africa. The company has committed 40 000 t of fertilizer, agronomic expertise and digital enablement to smallholder farmers in a public-private partnership supported by the UN World Food Program, the Norwegian government and African institutions. Heading for Kenya and Tanzania, the first 20 000 t of YaraMila onboard the cargo ship Bonette left the plant during the early morning hours on 28 June. Aiming to reach smallholders in Kenya, Uganda, Rwanda, Tanzania, Zambia, Malawi and Mozambique, the fertilizer and agronomic support will help farmers produce food for one million people for one year. “I am proud that Yara can contribute to increasing food security in vulnerable communities. The Action Africa initiative has many milestones to come and I am convinced that we have only seen the beginning. The total impact of this will go far beyond what we first envisioned,” said Pablo Barrera Lopez, Executive Vice President Strategy & Communications.
BCI MINERALS, an Australian-based resources company, has released the key results of the definitive feasibility study (DFS) on its 100% owned Mardie salt and potash project in Western Australia. The DFS confirms Mardie can become a globally significant Tier 1 salt and sulfate of potash (SOP) project offering attractive financial returns for more than 60 years. Based on the positive DFS results, the BCI Board has approved the company advancing the project towards a final investment decision (FID) by early 2021. Key results of the DFS include, among others, positive business case established for production of 4.4 million tpy of high purity salt and 120 000 tpy of premium SOP fertilizer; operating cost estimates showing competitive salt costs with other Western Australian operations, and SOP operating costs in the lowest quartile globally; project funding initiatives well progressed, including negotiation of indicative debt term sheets with the Australian Federal Government’s Northern Australia Infrastructure Facility (NAIF) and a number of Australian and international banks.