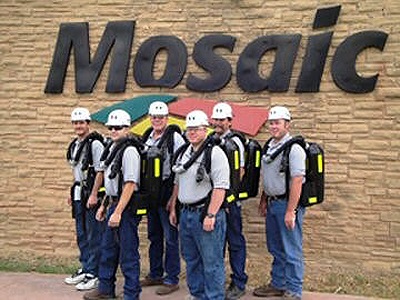 The Mosaic Company, a Fortune 500 company based in Tampa, Florida, US, has announced a range of global sustainability 2025 targets to support its environmental, social and governance (ESG) performance. The targets include reducing greenhouse gas emissions by 20% per tonne of product, reducing freshwater use by 20% per tonne of product and implementing 4R Nutrient Stewardship on 25 million acres, all by 2025. “It takes our team of more than 12 000 employees-across all roles and geographies-to drive performance in the areas that matter most to Mosaic and its diverse stakeholders,” said President and CEO Joc O’Rourke. “ESG performance is one of the ways we will manage risks, leverage future opportunities and measure our progress toward our targets. Employees will continue to play a critical role in this journey as we pursue our mission-to help the world grow the food it needs.”
Arianne Phosphate, a company developing its Lac à Paul project, one of the largest phosphates reserve in Canada, announced it has entered into private placement financing for gross proceeds of CAN$1.5 million. Moreover, the Government of Quebec has subscribed to 3.33 million units by investing in this placement through Investissement Québec. “The recent events surrounding Covid-19 and the resulting disruptions in the food chain, as well as the increased tensions around security of supply, continue to demonstrate the importance of our Lac à Paul phosphate project”, said Brian Ostroff, CEO of Arianne Phosphate, which is headquartered in Quebec. “We salute the support of our investors as we continue to move the project towards development for the benefit of all stakeholders and investors. In addition, the continued support of the Government of Quebec is an important element as we all work together to materialise the significant social and economic benefits for the region.”
German fertilizer producer K+S AG announced recently it was on track to sell its salt business in North and South America by the end of the year, a move that seeks to slash debt and allow the company to focus on potash fertilizer products. The sale of Morton Salt, which comes a decade after K+S acquired it for $1.7 billion, was triggered by a drop in potash prices that undermined the debt-financing of the company’s new potash mine in Canada – Bethune. Opened in 2017, Bethune is the first greenfield potash mine in Canada’s Saskatchewan province in more than 40 years. K+S, the world’s largest salt producer, expects to complete the transaction and receive payment after 2021. That’s why the company is also implementing other measures to reduce debt, which should strengthen its balance sheet by more than 2 billion euros by that time.