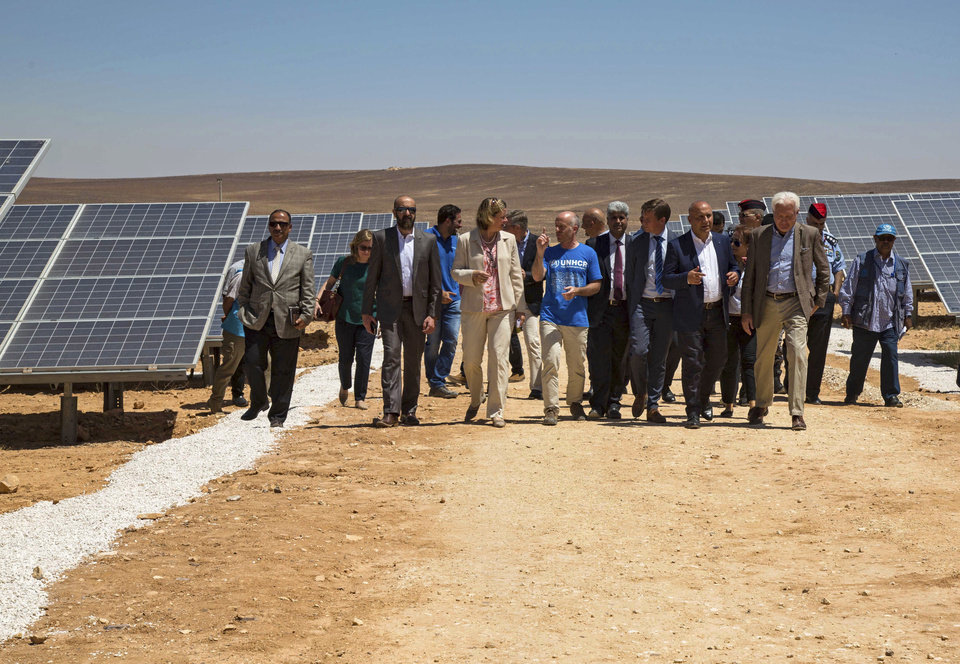 Jordan’s Azraq is the world’s first solar plant in a refugee camp about to transform the lives of thousands of Syrians living in harsh desert environment. The plant will provide electricity to the thousands of Syrians families who will now have light at their homes at the Azraq refugee camp located in Jordan’s barren northern desert. For the previous two years, Azraq’s residents relied on portable solar lanterns to light their homes and had no means of cooling their shelters or preserving their food.

UNHCR, the UN Refugee Agency, launched Azraq’s new two-megawatt solar photovoltaic plant last week. The plant will bring clean energy free of charge to about 20,000 Syrian refugees. The new grid should be expanded to all 36,000 refugees currently residing in the camp by early 2018. The solar plant was constructed at a cost of €8.75 million (US$9.6 million), 100% funded by the IKEA Foundation’s “Brighter Lives for Refugees” campaign. It will result in immediate energy savings of US$1.5 million a year – which UNHCR will be able to reinvest in other forms of much-needed assistance – as well as annual carbon dioxide emissions savings of 2,370 tons.

“The world’s first solar farm in a refugee camp signals a paradigm shift in how the humanitarian sector supports displaced populations. UNHCR Jordan will save millions of dollars, while reducing carbon emissions and improving living conditions for some of the world’s most vulnerable children and families”, Per Heggenes, CEO of the IKEA Foundation, said. “We are very grateful to everyone involved – especially the IKEA customers and co-workers who took part in the Brighter Lives for Refugees campaign, the UNHCR, the Jordanian government, EDCO, and most of all, the Syrian and Jordanian people who made this project a reality”.

The construction of the Azraq solar plant also provided an income opportunity to more than 50 refugees who have been given training and employment to help build the solar farm under the supervision of the Jordanian solar company Mustakbal, which led the works on site. Some of these refugees will be also in charge of the maintenance works in the future.