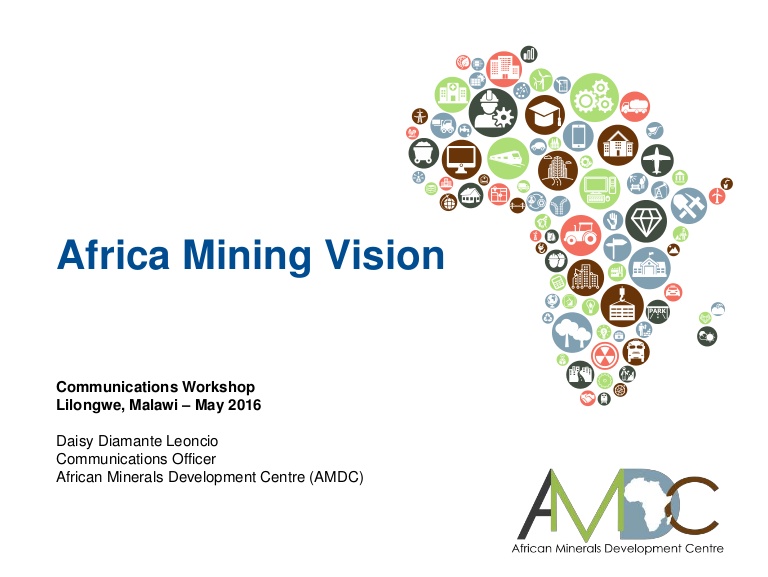 The Africa Mining Vision (AMV) was adopted by Heads of State at the February 2009 African Union summit following the October 2008 meeting of African Ministers responsible for Mineral Resources Development. It is Africa’s own response to tackling the paradox of great mineral wealth existing side by side with pervasive poverty. Envisioning a holistic approach, the AMV advocates thinking outside the “mining box”. Hence it’s not just a question of improving mining regimes by making sure that tax revenues from mining are optimized and that the income is well spent – although that is clearly important. Rather it’s a question of integrating mining much better into development policies at local, national and regional levels.
That means thinking about how mining can contribute better to local development by making sure workers and communities see real benefits from large-scale industrial mining and that their environment is protected. It also means making sure that nations are able to negotiate contracts with mining multinationals that generate fair resource rents and stipulate local inputs for operations. And at regional level, it means integrating mining into industrial and trade policy. Most of all it’s a question of opening out mining’s enclave status so that Africa can move from its historic status as an exporter of cheap raw materials to manufacturer and supplier of knowledge-based services. The AMV is a first and foremost a developmental mining approach that insists that the royal road to growth is through building economic and social linkages that benefit Africa itself.
There are many elements that feed into a system of governance that can successfully convert mineral and oil revenues into shared wealth for its citizens. These elements cover the entire value chain from how a government drives exploration, how it conceptualizes its strategy for the exploitation of mineral resources, the extent to which it can effectively oversee the industry and how it eventually spends the revenues generated from its resource wealth. This element is at the heart of how soon the objectives of the African Mining Vision can be realized from the wealth that the continent possesses. A case in point here is the success of Norway in the management of its oil funds that lies with its dedication to continually enhancing the economic infrastructure of the nation and the quality of life of its citizens whilst also saving for the future.