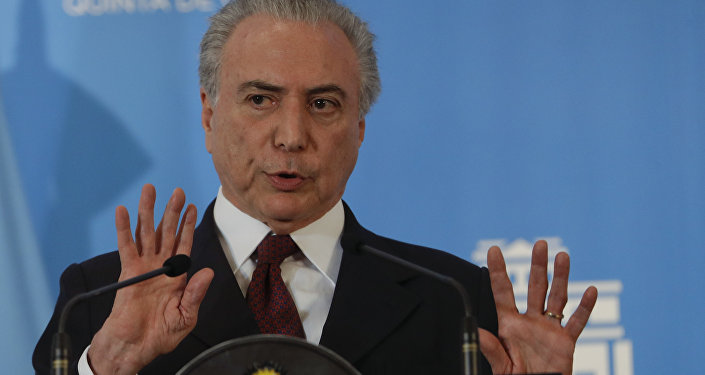 Brazilian President Michel Temer said on Saturday (15 October) that his cabinet does not intend to increase fuel taxes, which was only a day after state-owned oil company Petrobras had announced a fall in fuel prices. The announcement of the price cut by Petrobras marked a significant change following years in which politically driven pricing caused the company lose billions of dollars.

President’s comments might dispel some speculations that the Brazilian government would plan to increase the CIDE fuel tax in order to make up for lost revenue. “The CIDE, no,” Mr Temer said during his official visit to India. “There are no plans at this moment for that.” Mr Temer replaced impeached President Dilma Rousseff after she had been toppled in August for budget irregularities. He said that any tax increase at the moment goes against the efforts by the new cabinet to rein in public spending, particularly via an intended constitutional amendment that would cap expenditures.

“When we thought about a ceiling on public spending, we thought precisely about avoiding any new type of tax,” he said. Despite the fall in crude prices globally in recent years, Petrobras’ cut was the first downward change in Brazilian fuel prices since 2009. The new cut decreased prices for diesel by 2.7 percent and gasoline by 3.2 percent. According to Brazil’s National Petroleum Agency, Petrobras has 13.3 billion barrels of proven oil and gas reserves, out of which 10.9 billion barrels are oil and condensate. According to the agency, Brazil has enough oil right now to last a bit more than 14 years given the current level of production. In 2015, the country produced 932 million barrels of oil and oil equivalents, 4 percent higher than in 2014.