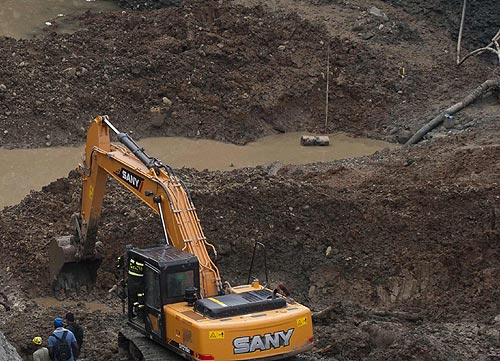 The Democratic Republic of Congo (DRC) has just opened one of the largest gold mines in the African continent. South African companies Randgold Resources and AngloGold Ashanti have invested more than $2.5 billion in the Kibali mine expected to produce annually about  600 000 ounces of gold.
The Kibali mine is owned by Randgold and AngloGold, each with a 45% stake, while the remaining 10 % stakes are held by the state-owned gold mining company “Société Miniere de Kilo-Moto”.
Experts say the mine has reserves that will ensure its operation until at least the year 2031, with 550,000 ounces (15.6 tonnes) of gold expected to be produced this year.
The Kibali gold mine is located in the northeast of DRC, 150 kilometres west of the Ugandan border town of Arua. The African country has important resources of gold, copper and cobalt but also diamonds, iron, nickel, manganese, bauxite, uranium and cassiterite.
DRC also produces half of the world’s supply of tantalum. Control over the areas rich in mining resources is one of the major factors fuelling armed conflicts rocking the impoverished country.