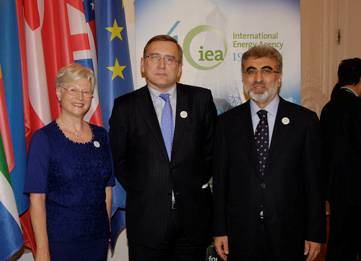 Estonia has officially become the 29th member of the International Energy Agency (IEA) as the country completed the final steps towards full membership, IEA Executive Director Maria van der Hoeven announced. She said the IEA was pleased to welcome Estonia in the agency as it had made remarkable progress in transforming its energy sector, and there was every reason to expect that the successful process will carry on and be reinforced through the membership in the IEA.
Estonian Minister of Economic Affairs and Communications said that accession to the IEA was a significant milestone for Estonia in order to become an active participant in global energy policy. As a member state, sharing the common value of the IEA, Estonia has pledged to actively contribute to an efficient functioning energy economy. To meet a central requirement for full IEA membership, Estonia had to ensure it had emergency oil stocks equivalent to a minimum of 90 days relative to the previous year’s net imports. Tallinn takes the country’s seat at the Governing Board, which is the highest political decision-making authority of the IEA. As such, Estonia joined the collective energy security system which is the backbone of the agency. Member country ministers of the IEA endorsed Estonia’s membership at the IEA Ministerial Meeting in Paris in November last year.
The IEA is an autonomous organization whose aim to provide its 29 member countries with clean, affordable, and reliable energy. Established in response to 1973-1974 oil crisis in the aftermath of the Yom Kippur war, the IEA’s main role was to aid countries to coordinate a joint response to major disruptions in oil supplies through the release of emergency oil stocks to the markets. Although this goal is still an important part of its agenda, the IEA has expanded its focus and functions since the organization was established.