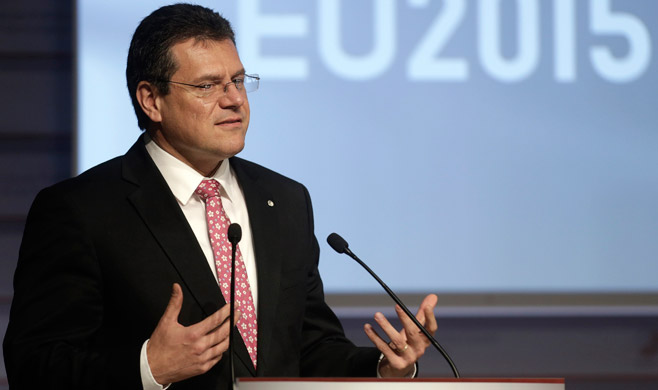 EU energy chief, Maros Sefcovic, said on Friday (6 February) that the European Union was readying to convince Russia to renew its negotiations with Ukraine over the gas prices. Russia’s energy minister had earlier said that this step was feasible only if certain conditions were met. Currently, both the gas price and energy relations between Moscow and Kiev are governed by a “winter package” that was brokered by the EU Commission last year. The package is valid until the end of March. Under this deal, Russia’s giant Gazprom resumed shipments to Ukraine in December that had been on hold for about half a year due to the disputes over the price of oil. Brussels and Kiev would like to see the current agreement extended.

Mr Sefcovic, who was speaking on the sidelines of an energy conference in Riga, said that he had already raised the idea of launching new negotiations with the Kremlin last month. “The response I got was: ‘What is there to negotiate because after March we will simply come back to the contract?’,” he said. In his opinion though, there are further elements that the Russians would like to see and that could motivate them to renew the talks.

Russian Energy Minister, Alexander Novak, said that his country was ready to negotiate a new agreement with Ukraine if Kiev pays back its unpaid bill, which is, in his opinion, a condition tough to be met. “If the point of this (new) agreement would be the debt redemption, then we are most likely to be ready to hold such talks,” Mr Novak said. Moscow says that Kiev owes about $2.44 billion, including fees. Ukraine, however, disagrees and claims that Russia simply charges it too much. Kiev is currently paying Moscow $329 per 1,000 cubic meters but European summer spot gas price for Ukraine could be somewhere between $250 and $300 per 1,000 cubic meters, Ukrainian Prime Minister Arseniy Yatseniuk confirmed last week.