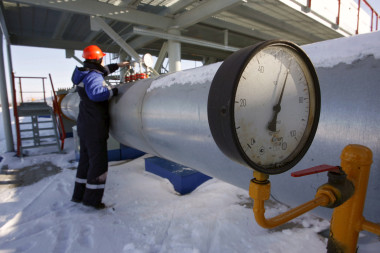 Russian state-run giant, Gazprom, threatened on Tuesday (24 February) that it could potentially cut off its gas supplies to Ukraine within two days, thus putting supplies to Europe in jeopardy as well. The company’s warning came only a few hours before a meeting of the foreign ministers of Germany, France, Russia, and Ukraine in Paris. Ukraine’s “Gazprom” – state-run Naftogaz, had said already before the announcement that Gazprom has not been sending its deliveries that Kiev had already paid for with the help of Western money.

Gazprom’s CEO, Alexei Miller, however, said that “Ukraine has failed to make a new pre-payment for gas in time”. As a result, he added, this “will in two days lead to a complete termination of the Russian gas supplies to Ukraine, which creates serious risks for the gas transit to Europe”. Mr Miller also pointed out that it takes two days for Naftogaz to transfer money to Gazprom.

Yet, Ukraine’s Naftogaz published a statement accusing Gazprom of not honoring the pre-paid gas supplies. According to the statement, “Naftogaz ordered 114 million cubic meters in line with the ‘winter package’ supply conditions, but Gazprom delivered only 47 million cubic meters”. Naftogaz also complained that the disruption in gas deliveries from Gazprom is a “violation” of the agreement between Moscow and Kiev brokered by the European Commission.

Ukraine is an important transit point for Russian gas deliveries through to Europe. Disruption in gas supplies could seriously endanger also the supplies to the European Union, which account for about a third of the block’s gas consumption. Around half of it is flowing via Ukraine. Many EU Members States are completely dependent on the gas from Russia, such as Estonia, Finland, Lithuania or Latvia (based on consumption in 2007).