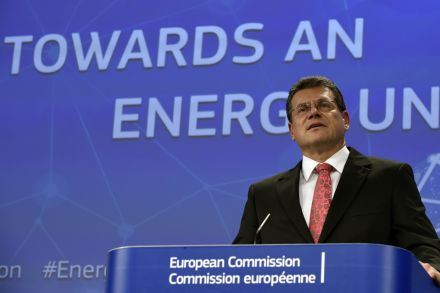 As part of the European Union’s strategy to decrease its dependence on Russian energy supplies, the bloc is set to start buying gas from Turkmenistan by 2019, the European Commission Vice President in charge of the project of the Energy Union, Maros Sefcovic, has announced. Russian energy supplies currently cover about a third of the block’s gas needs, much of which is transferred through conflict-struck Ukraine. The conflict over Crimea between Ukraine and Russia has prompted Brussels to seek for alternative ways to ensure energy for the EU. Mr Sefcovic said that the EU and Turkmenistan had “good mutual understanding” and added that “for Turkmenistan it is very important to diversify its export options, while for the EU it is very important to diversify its imports”.

When speaking in the Turkmen capital of Ashgabat, Commissioner Sefcovic confirmed that “Europe expects supplies of Turkmen gas to begin by 2019”. Turkmenistan that has the world’s fourth largest reserves of natural gas seeks to diversify its exports away from Russia as Moscow decreased its imports from the Central Asian country to 4 billion cubic meters this year from 11 bcm last year. Mr Sefcovic visited Turkmenistan on Friday (30 April) where he met with high-profile Turkmen politicians and with leaders from Turkey and Azerbaijan. They discussed “all aspects referring to the trans-Caspian pipeline”, the project that is meant to transfer Turkmen gas to the EU across the Caspian Sea through the so-called “southern gas corridor”. For years, the project has been deadlocked due to economic, geopolitical, and ecological considerations but now Turkmenistan is ready to join it.

In 2015, Ashgabat and Ankara signed a framework deal to supply gas to the projected Trans-Anatolian natural gas pipeline project (TANAP), which will transfer gas from Azerbaijan’s Shah Deniz II field in the Caspian Sea. TANAP that will be constructed from the Turkish-Georgian border to Turkey’s borders with Greece and Bulgaria should be completed by the end of 2018, so that it can become operational in 2019. Mr Sefcovic said that “between 2019 and 2020 all these pipelines from Azerbaijan to the borders of Europe – in the direction of Greece, Albania and Italy must be built” but he declined to comment how much gas Turkmenistan could supply to Europe. Estimates based on the hints from Turkmen officials speak about 10 to 30 bcm of gas annually.