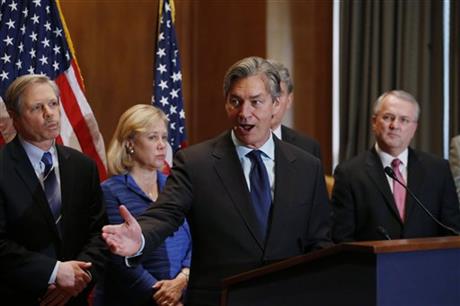 At the beginning of this month, US Senators Mary Landrieu and John Hoeven introduced a bill to approve the controversial Keystone XL Pipeline. According to both senators, the review process had been tough with five studies having been conducted. “It is not now time to stop studying and start building,” they say. The Keystone Pipeline system is an oil pipeline system in the United States and Canada running from Western Canadian Sedimentary Basin in Alberta (Canada) to refineries in Nebraska, Texas and Illinois (US). The system carries crude oil from the Williston Basin in Montana and North Dakota (US), in addition to synthetic crude oil and diluted bitumen. The three phases of the project are already operational, whereas the fourth phase – Keystone XL extension – is still waiting for an approval by the US government. The proposed fourth phase should start in Hardisty in Alberta (US) and extend to Steele City thus virtually replacing the existing Phase I part of the pipeline.
Keystone XL extension has encountered fierce criticism from both senators and environmentalists. Besides environmental concerns and threats to fauna and flora, landowners in the path of the pipeline have also complained about vague plans to confiscate private land for the sake of the XL extension. Geopolitical considerations are also in the centre of attention as many analysts back the project on the grounds of increased energy security for the US. On the other hand, an independent study (a 2011 study by Danielle Droitsch of Pembina Institute) revealed that “a good portion of the oil that will gush down the Keystone XL will probably end up being finally consumed beyond the territorial United States”. On the top of these issues, indigenous populations have also raised their concerns about possible damage to sacred places, pollution, and water contamination.
While the current idea of expediting Keystone XL is appealing to proponents of the project, in April this year the State Department extended the review due to “unprecedented” number of public comments it had received. Therefore, it is still unclear whether the group of US senators will now manage to bypass the Obama administration and force approval for the controversial pipeline extension.