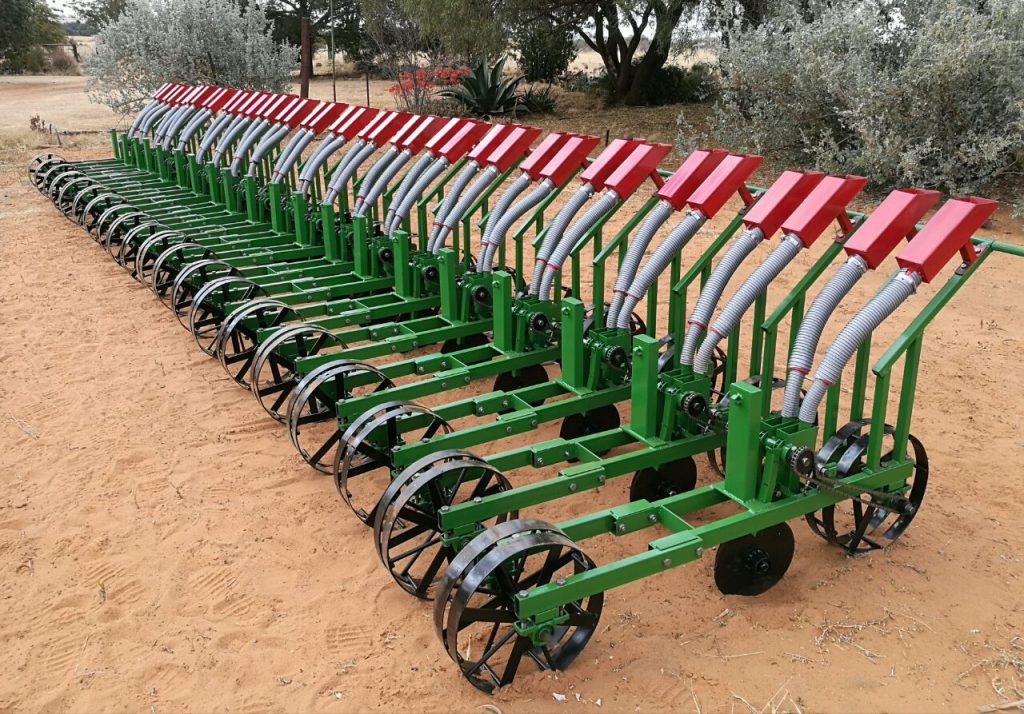 He has supplied hand planters to more than 10 000 farmers across Africa so far and plans to become the John Deere of small-scale farmers. “I have grown my planter product range, which started with a hand maize precision planter, to include a push planter, ox-drawn planter and a tractor-drawn planter, which allows various seeds to be planted using different seedplates,” says farmer and inventor Michris Janse van Rensburg. As the owner of ‚Backsaver Farming Equipment‘ company, he is one of the very few people who are trying to make life easier for the farmers, predominantly women, who undertake this backbreaking task.
As a commercial maize farmer, Janse van Rensburg was hit by a major cut worm outbreak in 2009, which required the replanting of many seeds. With no planter on the market suitable for small-scale farming operations, he endeavoured to develop one. Hence, based in Bultfontein in the Free State Province of South Africa, Backsaver Farming Equipment introduced to the world the equipment manufacturing when he won an award for his invention of a hand planter, at the ‘Boerepatente’ competition at the Nampo Show in 2010. He built this simple machine, initially for his own use, when his crop of maize had patches where the seed, planted with a conventional maize planter, hadn’t germinated.
“I started to manufacture the planter part time while undertaking my farming activities,“ Janse van Rensburg explains. „One thing led to the other and today we manufacture about 100 planters a month, depending on the season, at our factory on our farm in Bultfontein. We upscale our facility all the time as demand for our products is constantly growing.” Although planting is important, his company has found that fertiliser application is exceedingly difficult for small-scale farmers to apply accurately. For example, only 10 g/m of fertilizer in needed when planting maize. Trying to distribute that by hand for 13 000 m, which represents 1 ha of maize is impossible to do correctly, as some plants may get too much fertilizer and others too little.
“We focused a lot of energy into developing applicators to help farmers become successful. For too long small-scale farmers have applied fertiliser because they know it is important but have done so inaccurately. For example, a phosphate fertiliser must be delivered deeper into the ground to ensure uptake by the plant,“ he says. Now fertiliser applicators make up 80% of Janse van Resburg’s business, with Backsaver manufacturing two types of applicators – a wheel-driven applicator and a single-shot applicator. The growing uptake of Backsaver’s fertiliser applicators is potentially owing to there being no similar product on the market and it working so well for farmers, he explains, stressing that “not even the Chinese offer such a product.”