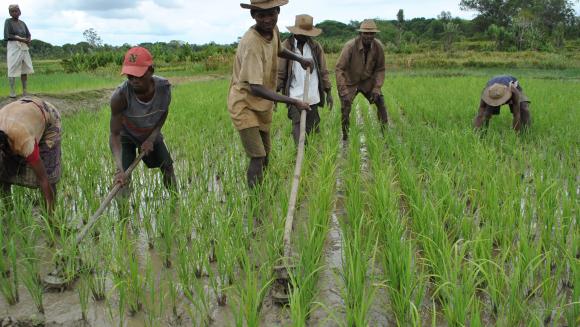 The phosphate developer Minbos Resources is collaborating with the International Fertilizer Development Centre (IFDC) on further greenhouse trials of the phosphate rock blend from the Cabinda phosphate project in Angola. The company’s vision is to build a nutrient supply and distribution business that stimulates agricultural production and promotes food security in Angola and the broader Congo Basin. The Minbos Resources’ plan is to mine phosphate rock from the Cácata Deposit and transport it to the Porto de Caio where all the necessary electricity, gas, water and shipping infrastructure exists to build and operate a granulation plant to produce enhanced phosphate rock granules (phosphate rock + mono-ammonium phosphate / MAP). The enhanced phosphate rock granules will become the P nutrient feedstock to blend with imported nitrogen (N) and potassium (K) granules in NPK blending plants to exact specifications suited to Angolan crops and soils.
To ensure the Cabinda blend is suited to crops and soils in Angola, the company has engaged the Alabama-based IFDC to complete an advanced greenhouse trial. The greenhouse trials have the potential to enhance the value-in-use of the Cabinda phosphate rock blend, or Cabinda Blend, and improve project economics. Previous greenhouse trials completed by the IFDC confirmed that Cabinda phosphate rock blended with MAP, known as the Cabinda blend, returned similar agronomic performance to MAP in crops and soils typical for Angola. The trials demonstrated positive agronomic outcomes, including a Starter Effect boost provided by the MAP content to promote early root development and plant growth; an Enhancement Effect provided by the acidity of MAP and complemented by acid soils and plant rhizosphere to stimulate the dissolution of the Cabinda phosphate rock; and an Economic Benefit, with Cabinda blend significantly cheaper than commercial water soluble phosphate (WSP) fertilizers, MAP and diammonium phosphate (DAP).
Previous greenhouse trials have demonstrated the potential for the Cabinda blend to have a greater economic benefit than previously understood with 2nd and 3rd crops revealing a residual effect of phosphate from phosphate rock, which is recognised in academic literature and would boost the economic potential of the Cabinda blend. The current field trial in Huambo, Angola, designed by Plant Nutrition Science and Technology (NPCT) in Brazil and co-ordinated by the Angolan Institute of Agronomic Investigations (IIA), is ongoing, the crops have been harvested and the crop yields are being weighed. The objective of this trial was to prove the effectiveness of the Cabinda blend in Angolan field conditions. Field Trials for the next growing season are being planned in collaboration with NPCT, IFDC and the IIA to compare the Cabinda blend to commercially available fertilizers.