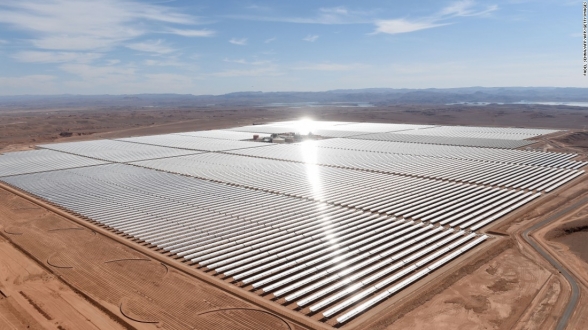 During the implementation of the Green Deal, the European Union must not overlook North African countries in the Southern Neighborhood, as they are also natural partner candidates given their geographical proximity and strong ties with the bloc, Amine Bennis, an international legal counsel, argues in his commentary published by the Italian Institute for International Political Studies (ISPI).
With a target of reducing greenhouse gas emissions by at least 55% by 2030 and becoming climate neutral by 2050, the European Green Deal sets out the response chosen by the EU and its member states to tackle climate and environmental challenges. The strategy further seeks to strengthen the EU’s global leadership by establishing environment, energy, and climate partnerships with its partners and neighbors. North African countries have engaged, at different levels, in the green energy transition, implementing investments and devising policies in renewable energy and energy efficiency. Within the Maghreb region, Morocco, Egypt, and Tunisia made clear commitments to decarbonize their economies, while Algeria and Libya are far behind.
But the Covid-19 pandemic and Russian invasion of Ukraine could potentially slow down the pace and impact in the short-term the ambitions of the green transition agenda of North African countries. In particular, the geopolitical impact of the war on Russian gas supply creates a tension between additional gas requests from Europeans to fill in the gap, consequent incentives for fresh gas projects in North Africa, and the target of reducing dependence from such sources through additional renewable energy capacity. To that end, Bennis argues that if the EU and its member states take a geopolitical stance towards North African countries engaged in the green energy transition of the region, including Morocco which is heading towards reaching its 42% electricity target capacity from renewable energies by 2023, the logic of their partnership would support a strengthening of EU’s external relations towards such strategic partners.
In June 2021, the EU adopted the new regulation Global Europe Instrument aimed at funding international cooperation including the Southern Neighborhood. In February 2021, the European Commission proposed a Renewed Partnership with Southern Neighborhood – A New Agenda for the Mediterranean, with an updated regional policy agenda to focus on sustainable long-term socio-economic recovery and job creation. However, with “only” €19.32 billion dedicated to the whole Neighborhood under the Global Europe Instrument, this budget remains limited in terms of financing the implementation of the 2030 National Determined Contributions of North African countries. The monetary needs of specific North African countries range at USD 40 billion for Morocco, USD 73.04 billion for Egypt, and USD 19.4 billion for Tunisia.
Apart from the planned creation of a European Export Credit Facility, as part of the Global Gateway, the use of the EU Projects of Common Interest is another source of funding for green energy connectivity infrastructure across the Mediterranean. Within this framework, eligible projects can apply for grant funding under the Connecting Europe Facility. Thus far, only the Elmed 600 MW project of an electricity interconnection between Tunisia and Sicily has attracted interest. A recent initiative to promote renewable electricity trade between Morocco and the European Internal Energy Market deserves greater attention as it shows to be promising. The connection of the Ukrainian electricity network to the European grid could generate further momentum for cross-Mediterranean interconnection projects as a stability instrument to mitigate fragile contexts in the Southern Neighborhood, such as faulty power plants or electrical load shedding. To date, the most notable achievements in renewable energies in North Africa benefiting from European funding include: an Egyptian 240 MW wind farm in the western coast of the Gulf of Suez, the first photovoltaic plant connected to the national electricity grid at Kom Ombo in Aswan, Morocco’s solar projects with the completed 580 MW Noor Ouarzazate complex and the ongoing 1,600 MW Noor Midelt initiative.