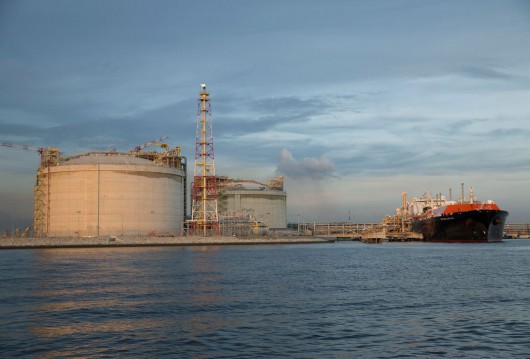 More than a dozen of LNG tankers are currently parked around Singapore – one of the biggest trading hubs for fuel in the world – signaling that the slowdown in the global energy markets might be slipping into a crisis. The weak demand in Asia is so harsh that some experts predict that the future of the entire LNG industry may be impacted. “The weakness in energy markets is threatening to derail LNG’s emergence as the pre-eminent energy source,” ANZ bank commented.

Asia’s spot prices of liquefied natural gas have decreased by almost 75 percent since February 2014 in response to slowing demand and rising output. Shippers have been parking their tankers around important ports, such as Singapore, as it is relatively easy there to maintain and service unused vessels by the time new orders appear. However, idle ships incur costs for the owners – one vessel means a loss of $60,000 in daily chartering.

Major ship brokers estimate than more than 10 percent of the global fleet of 400 LNG tankers is not being used at the moment due to weaker growth in Asia’s most important economies. The current situation at the Singaporean port, however, hints that the problem could get even worse. “There are currently 30 to 40 (oil and gas) tankers sitting in Singapore, many without anything to do,” Javier Moret of Germany’s biggest power producer RWE commented on the sidelines of a conference in Singapore last week.

Some shipping data suggest that seven tankers have been idle off the east coast of Malaysia for a fortnight, and other two vessels have been anchored south of Indonesia for a couple of months. About six tankers are currently in Singaporean docks. All these tankers can carry gas worth more than $200 million in current market terms. Approximately a year ago, the same amount of gas would have been worth as much as $600 million.