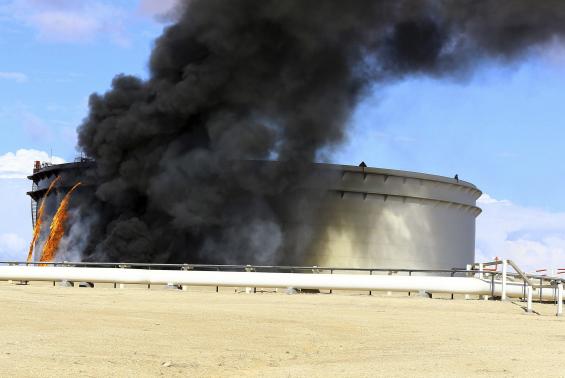 As Libya’s armed groups fought for control over the country’s largest oil depot in the eastern port of Es Sider, a rocket set a storage tank on fire. Riots and fighting were also reported in Sirte, which is located west of Es Sider, killing as many as 19 people including 14 guards at a power plant. Es Sider and Ras Lanuf, another major oil refining sites, have been both closed since a force allied to a competing government in Tripoli tried to seize them. The struggle to take the two major refining sites is part of a confrontation between formed rebels who helped overthrow Muammar Gaddafi in 2011. These rebels have changed their agenda and now fight for their share in the country’s abundant oil reserves.

Ali Hassi, a spokesperson for a security service affiliated with the internationally-recognized government of Abdullah al-Thinni, explained that the rebels attempted to seize the Es Sider with speedboats, setting an oil tank on fire. At the same time, Ismail al-Shukri, spokesman for the rival force, said the group has started a new operation to take the ports but refuted the allegations that it had sent boats or shot at any tanks. He said that the other side was to blame suggesting that it was an aircraft that attacked the tank. Libya’s ongoing violence and riots have exerted a significant impact on the country’s crude oil production. While Es Sider used to ship about 447,000 barrels daily and Ras Lanuf to refine approximately 220,000 barrels daily, they are now processing together only about 300,000 barrels per day.