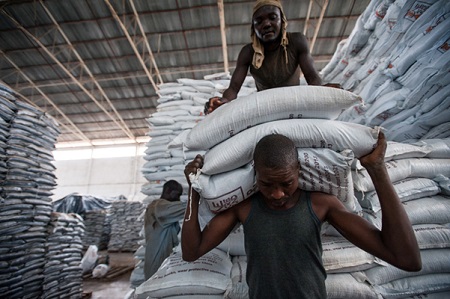 Mombasa, Kenya’s second largest city, is expecting more than 100,000 metric tonnes of fertilizer imported by the government under the country’s fertilizer subsidy program to arrive soon. According to Newton Terer of the National Cereals and Produce Board (NCPB), the shipping will be distributed to farmers via NCPB depots with the help of government officials.

Mr Terer said that the NCPB also intended “to source from various suppliers additional quantities of the commodity under agency agreements, which should help achieve the National Government’s aim of ensuring that subsidized fertilizer is available throughout the year.” He added that the NCPB was currently buying maize from farmers in various parts of Kenya including Uasin Gishu, Trans Nzoia, Nandi, Bungoma, West Pokot, Elgeyo Marakwet, Nakuru and Kericho Counties. NCPB has guaranteed that farmers would be paid for their maize promptly upon delivery at the NCPB depots in their respective regions.

The shipment of fertilizer will bring a major relief to the farmers, who had to purchase fertilizer at very high prices from dealers. In the current financial year, the government put aside 3 billion shillings to cover subsidies of fertilizers and seeds trying to help farmers face high costs of production. In the government’s struggle to make fertilize more affordable, a contract with Toyota Tsusho, which is building a manufacturing plant in Kenya, was finalized. However, despite these efforts, farmers will still likely have to face unscrupulous dealers and traders selling fertilizer at very high prices, which in turn results in high production costs and possibly also high food prices.