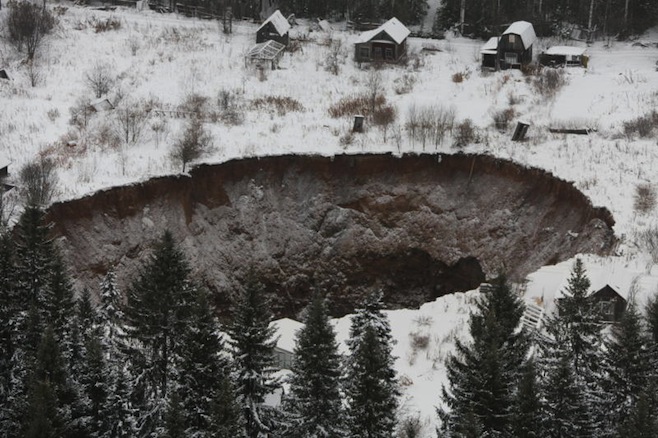 A huge sinkhole that affected Solikamsk-2, one of the Russian mines of the potash giant Uralkali, continues growing. The size of the sinkhole has increased from 30 by 40 meters in mid-November to 50 by 80 meters today, while the average inflow at the same time surpassed 700 cubic meters. The sinkhole, which formed as a result of a mining accident, negatively influenced the company, the world’s largest potash producer. The flooded mine accounts for one fifth of the Uralkali’s capacity.

The company was forced to stop its operations at the mine in November after it had been flooded by brine (salty water). In the official statement, company’s management said it was making efforts to get rid of the brine, which could flood additional underground spaces. However, mining analysts forecast that Solikamsk-2 will likely be lost. According to Alexander Baryakh of the Ural Mining Institute, “based on our analysis and the world’s experience in developing potassium mines, the risk of a negative scenario — the complete flooding on the mine — remains high”.

In response to the flooding, there has been a growing interest in North American potash stocks. Shares of American potash companies have been improving since Uralkali suspended its operations at the Solikamsk-2 in Russia’s Perm region. Yet, the stocks have recently been hard-hit by the news that Uralkali could start repair work at the mine and potentially launch its operations, although only partially. When the Russian potash giant clarified that those media reports were speaking about maintenance work, North American potash stocks immediately responded. Thus, analysts agree that ongoing speculations about the potential shutdown of the mine will most likely benefit competitors.