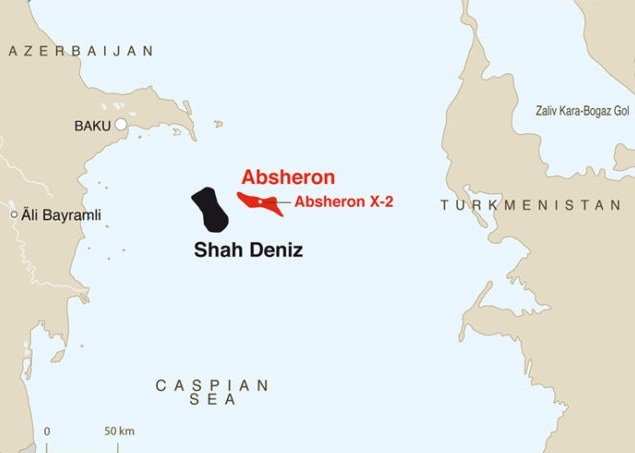 According to Azerbaijan, natural gas produced in the Absheron offshore gas field in the Caspian Sea could be exported to Europe through Southern Corridor (SGC). SGC is an initiative of the European Commission to transfer gas from the region to Europe. It consists of three pillars – the South Caucasus pipeline across Azerbaijan and Georgia, the TANAP pipeline across Turkey, and the Trans-Adriatic Pipeline (TAP) across Greece and Albania, with an offshore section to southern Italy.

The $9.3-billion TANAP part of the project is underway and it is meant to transport gas from Azerbaijan’s Shah Deniz field from Georgian-Turkish border to the Western borders of Turkey. The pipeline should be operational in 2018 and after the completion of the TAP construction, more gas will be sent to Europe already in 2020. The President of the Azerbaijani state oil company SOCAR, Rovnag Abdullayev, commented regarding the progress that “Partly, we are even ahead of schedule and 850 kilometers of pipes have been already welded”.

TAP’s initial capacity will be 10 billion cubic meters annually with plans to expand it by 100 percent. Azerbaijan is to produce its first output from the Absheron gas condensate field in the Azerbaijani sector of the Caspian Sea in 3 years‘ time with preliminary estimates of reserves being at 350 billion cubic meters of gas (bcm) and some 45 million tons of gas condensate. As Khoshbakht Yusifzade, the first Vice-President of SOCAR, explained, “Currently, the contractor is preparing a plan on the development of the field, according to the PSA contract (Exploration, Development and Production Sharing Agreement).”

Mr Yusifzade also added that “Certain steps are planned to be taken within the framework of the annual plan on gas production, including completion of exploration works on the implementation of the concept in September, approval of the development plan by partners in October, and approval of the program by SOCAR in early 2017. Final investment decisions on the preliminary production plan will be taken in the fourth quarter of 2017.  The first output well will be drilled in the third quarter of 2017 at the earliest”.