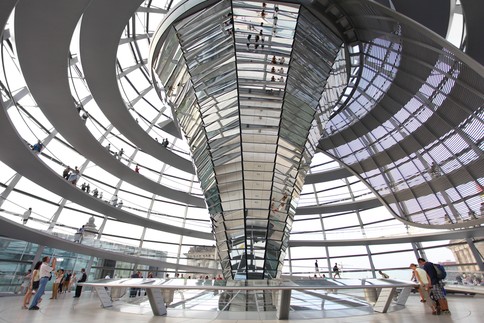 A growing number of German communities have started touting renewables as tourist attractions thinking they have found a silver lining. Moreover, the communities created a guidebook listing approximately 200 green projects around the country which are considered “worth the tour”. The guidebook, which was published with the support of the Germany’s Renewables Energies Agency, is already running to a second edition after the success of the first one. The author of the publication, Martin Frey, says that a nuclear plant in Kalkar is the world’s safest one, the claim that attracts more than 500,000 visitors every year. Interestingly, the plant has never started operation as a result of post-Chernobyl protests in 1986. Now it is an amusement park, including holidays, restaurants, and merry-go-rounds. Its most famous and most popular attraction is a huge cooling tower with a climbing wall outside and a carousel inside.
Another attraction promoted by the guidebook is Ferropolis, the City of Iron. Located on the site of a brown coal opencast mine in the German state of Saxony-Anhalt, Ferropolis is an open-air museum full of abandoned gigantic metal structures, immense excavators and mounting cranes, which give the place a flavor of a post-apocalyptic movie. Yet, the City of Iron is equipped with solar panels which help power yearly summer music festivals taking place in the premises of the “city”. Germany has abandoned its metal past which Ferropolis likely evokes and is moving fast towards renewable energy. In the last 10 years, renewable power generation has tripled and now provides a quarter of the country’s electricity and more than 380,000 job positions in wind, biogas, hydro, and solar plants which are rapidly taking over from coal and nuclear power.