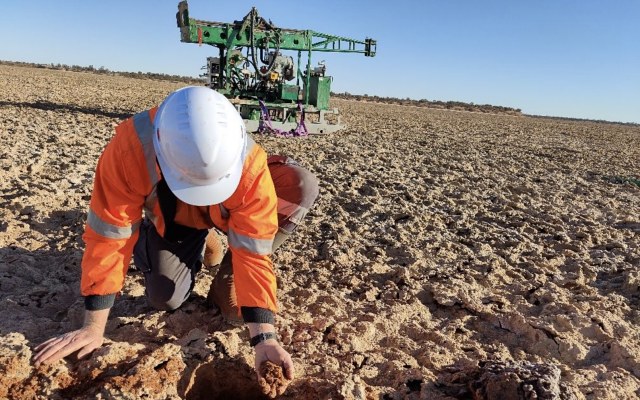 TRIGG MINING Ltd, the resources company based in Western Australia, has said that its maiden air-core drilling programme has been completed at its Lake Throssell sulfate of potash (SOP) project, located east of Laverton in Western Australia. The programme was significantly expanded from 38 holes to 54 holes, following the success of the first stage of the programme for a total of 5623 m. The programme has successfully covered the palaeovalley extent within the core tenement E38/3065 covering a strike length of approximately 36 km of the 112 km in the total project area. The drilling programme was completed by Ausdrill with a track-mounted air-core rig with an average hole depth of approximately 104 m with a maximum depth of 144 m. Field interpretation from visual inspection of air-core samples suggests that the southern portion of the tenement has comparable palaeovalley geology to the northern portion of the system and significant fluvial glacial deposits appear more prevalent in the southern portion of the tenement. This suggests a possible increase in the potential brine volume and a higher concentration of aquifer targets for future production bores. “We are continuing our systematic approach to unlocking the potential of this exciting high-grade sulphate of potash project, and we are looking forward to delivering a significant amount of news-flow for our shareholders and investors over the next few months,” Trigg Mining’s Managing Director, Keren Paterson, commented.
HIGHFIELD RESOURCES Ltd, an Australia-based company engaged in mineral exploration, has announced that the Observatorio de la Realidad Social, a social department of the Government of Navarra, has released the Social Baseline Study of the Muga mine, which concludes that the Muga potash mine represents a significant positive socioeconomic potential for the local region. The independent Government study concludes that the mine will be able to reverse local depopulation which is severely affecting the local communities. It also concludes that it could reverse the higher rates of local unemployment and that Muga could significantly boost the economies of the rural Navarran communities with indirect business opportunities. The report also outlines eight collaborative strategies for the regional government, authorities and the company to follow in order to achieve a sustainable implementation and growth. “We appreciate the endorsement of the Government of Navarra to the contributions of Muga and look forward to working together with the Government, local communities and all interested parties to get the Muga mine into production for the benefit of all stakeholders,” Highfield Resources CEO, Ignacio Salazar, said.
SALT LAKE POTASH Ltd, an Australia-based mineral exploration company, has announced the successful syndication of its US$138 million Senior Debt Facility, with Sequoia Economic Infrastructure Income Fund (SEQI) and the Commonwealth Bank of Australia (CBA) joining the facility. SEQI and CBA will invest US$39 million and US$25 million respectively into the facility, complimenting existing investments led and arranged by Taurus Mining Finance Fund No. 2 L.P (Taurus) and the Australian Government’s Clean Energy Finance Corp. (CEFC). Following the syndication, the Taurus investment will be reduced to US$35 million (from US$91 million) and CEFC to US$39 million (from US$47 million).

“I am extremely pleased to welcome SEQI, an experienced global debt investor, and leading Australian bank CBA, into our Senior Debt Facility,“ said the company’s CEO, Tony Swiericzuk. „The breadth and quality of investors that have been attracted to this facility is testament to the robust financial characteristics and positive environmental credentials of the project and its proficient execution by the SO4 team. We look forward to continuing our relationship with Sequoia and CBA as we pursue our vision of a multi-lake SOP province in WA.”