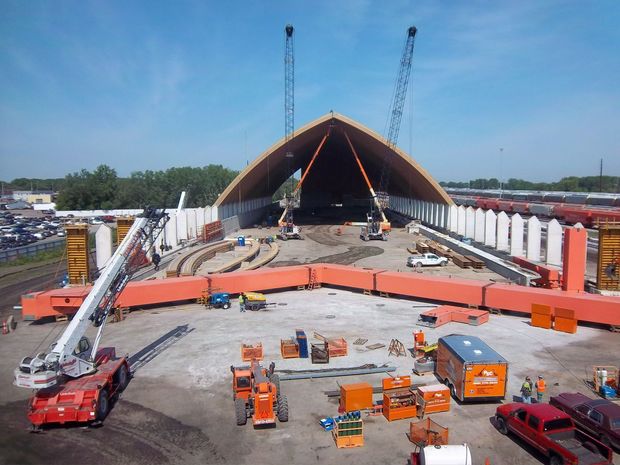 When considering the appropriate soil K (Potassium) Index for a crop or rotation, it is important to take into account that different crops have root systems with different total lengths, depths and efficiencies. Generally speaking, the longer an annual crop is growing, the longer the root system, which means that winter combinable crops and grass etc, should have good long root systems, which they do. Short season vegetable crops and spring sown combinable crops generally have much less total root length and do not explore the same depth of soil. It is therefore reasonable to expect that winter cereals will tolerate a lower soil nutrient concentration (Index) than vegetables. This explains why the general recommendation for cereals is to maintain a K Index in the lower half of Index 2, whereas for vegetables it is in the upper half, and for phosphorus at Indices 2 and 3 respectively.

Crops with a small root system need higher concentrations of nutrient in the soil to satisfy their peak uptake demand. The total requirement for potassium is related to the uptake of nitrogen and is necessary to maintain the turgor of the tissue cells; it is not ‘luxury’ potassium uptake. However, the size of a crop’s root system cannot be estimated reliably from the length of the growing period alone. Some species have shorter root systems than would be expected, often because they have fewer root hairs or are unable to create symbiotic relationships with soil mycorrhizae; which both play an important role in taking up nutrients from the soil.

Two crops which fall into the category of having unexpectedly limited root systems are potatoes and field beans. Thus, logic would suggest that, like short-season vegetables, they also need higher soil nutrient concentrations to achieve maximum yield potential, as found experimentally to be the case. When analyzing the total length of root per square meter in the top 20 cm of soil for a number of crops, winter wheat has a root system, which is more than 6 times longer than potatoes. We will also find the unbelievable length of roots, including the root hairs, which crops will produce in order to feed themselves – if grown in unrestricted soil, winter wheat roots lengths can reach 31 km/m2 of soil!

It is clear that a low soil K Index will be potentially much more serious for a potato crop than a winter wheat crop, which has to be considered when planning rotations and soil fertility levels. Unexpected changes in rotation planning, as may occur this year, bring additional challenges however, as P&K applications should be considered across a rotation, rather than as responses to individual crops in the year of application. In this scenario, there can be advantages from the use of fertilizer placement for potatoes and spring cereals, where zones of high nutrient concentration are established for the limited root system to find and to feed on. This is of particular importance for phosphate uptake, where high rates of uptake only occur when root length densities exceed 5 cm/cm3 of soil.

This season, with cropping plans being continually torn up over winter and new ones created, there is undoubtedly a much greater focus on spring cropping as the wet conditions were unavoidable for most. With the switch to spring cropping and a much greater proportion of spring cereals, there will be a dramatic reduction in root length compared to winter cereals. The same is true for a spring drilled winter cereal, as the length of the growing season is dramatically reduced compared with autumn sowing. Not only is the total length of root reduced, but so too is the depth to which they grow. Winter wheat, if unrestricted, reaches depths of over 2 m, which is over twice as deep as spring wheat.

Having access to adequate nutrition, especially early on in the growing season, is essential for spring crops to minimize the risks of deficiencies occurring that can be further exaggerated by restrictions in soil moisture that can occur in spring. With the daily potassium requirement of 6 kg K2O/ha (which can be less than the highest rate required), it is clearly easier for plants to obtain the nutrient they need from wet soils, but for the spring barley crop the nutrient level required remains in the K Index 2 range, even as soils get drier. However, for potatoes, not only does the requirement start in the middle of Index 2, as mentioned earlier, but as the soil dries out the concentration required moves quickly into Index 3 and even to Index 4.

These considerations are taken into account for the fertilizer recommendations of the different crops, but an understanding of the reasons behind the recommendations is essential for the sound management of risk. Much agronomic decision-making is to do with assessment and response to risk. It is fortunate that for phosphate and potash, the risk of deficiency and its consequent financial loss is relatively easily managed for most arable crops by maintaining soil P and K Indices in the middle of Index 2.

The Commentary can be downloaded here