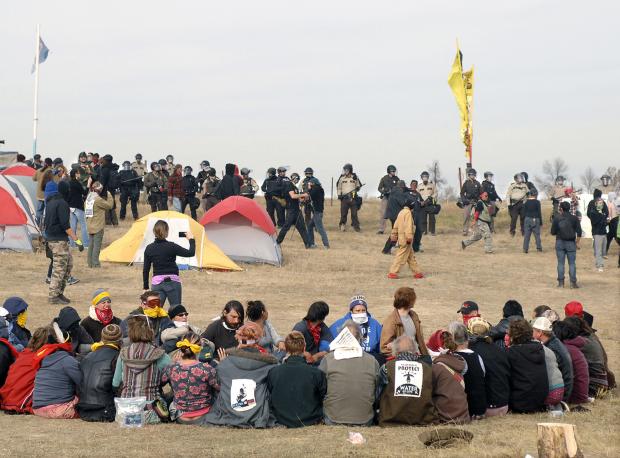 A crowd of veterans from the group “Veterans Stand for Standing Rock” arrived yesterday (4 December) at the freezing Dakota Access Pipeline protest site – one day before authorities are expected to remove protesters. More than 2,000 veterans had signed up to join members of the Standing Rock Sioux tribe and their supporters. “We’ll get settled on the fourth (4 December) and we’ll begin actions with the morning ceremony on the fifth,” one of the group leaders, Michael A. Wood Jr. said.

The veterans and the members of the Sioux tribe along with their supporters have thus started a new dimension of the protest against local enforcement officers. The US Army Corps of Engineers had warned that from today (5 December), protesters who refuse to leave the campsite could be arrested and then backtracked. Dave Archambault, Sioux Tribal Chairman, however, said that by “by sending out a letter saying you have until 5 December, it just escalates and causes more concern for safety for everybody.”

Federal officials yesterday also announced that they would not approve permits for construction of the Dakota Access Pipeline beneath a dammed section of the Missouri River that the Sioux tribe says is close to sacred burial sites. In this victory for many, federal officials also gave the activists until today to leave a campsite near the construction site. According to the Department of the Army, this decision was substantiated by the need to explore other routes for the pipeline crossing.

The protesters want to stop the construction of the Dakota Access Pipeline, a $3.7 billion project that would transport 470,000 barrels of oil a day across four US states. The pipeline would pass through an oil-abundant area in North Dakota where there is an estimated 7.4 billion barrels of undiscovered oil. The Sioux tribe sued the US Army Corps of Engineers after the project was given the final green light in July. The Sioux say that the pipeline will not only threaten the environment but it will also cut through land that is sacred.