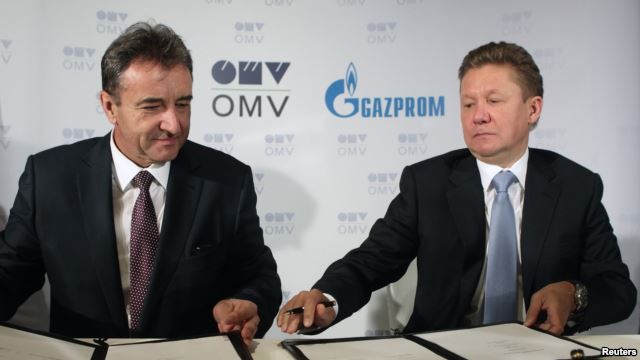 During his yesterday’s (24 June) visit to Vienna, Russian President Vladimir Putin reportedly tried to exploit the internal disagreement within the EU Member States over the Moscow-backed pipeline – South Stream – by seeking to ensure Austria’s support for the project. During his one-day trip, Vladimir Putin oversaw the signing of a shareholder deal between the Russian gas giant, Gazprom, and energy company OMV which would enable both to proceed with building a section of the projected South Stream pipeline in Austria.
President Putin is also believed to have used the opportunity to at least try to ensure that Vienna would back up the pipeline after Bulgaria had suspended its involvement in the project due to the mounting pressure from Brussels. As President’s aide, Yury Ushakov, said, this topic was a very important subject to Moscow and this is why it was discussed extensively during Putin’s meetings with Austrian officials. Amidst continuous tensions in the Crimean peninsula that show no signs of abating, the giant project of South Stream is emerging as the next disputable issue between Moscow and Brussels. The South Stream pipeline was projected to transfer Russia’s natural gas from remote Siberia to Europe.
Moscow, all too keen to finance the pipeline to eventually turn it as a means to secure European energy dependence, has accused the EU of manipulating Bulgaria against the project in order to seek vengeance over Russia’s involvement in eastern Ukraine. The EU Commission has asked all 28 Member States to stay united in resisting pressure from the Kremlin over the South Stream saying that the agreements and deals that Gazprom had signed regarding the pipeline are against EU’s competition law. Yet, despite Brussels’ efforts, the EU Member States seem divided over the pipeline, including some Russian-gas-dependent members even voicing a strong support to Moscow’s policy.