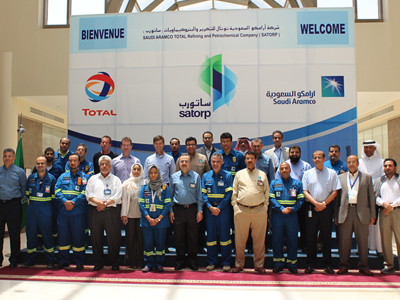 Saudi state-run giant Aramco and French oil company Total are planning to sign a deal next week for the expansion of their joint venture refinery in Saudi Arabia. The agreement would encompass an extension of the petrochemical hub at Total Refining and Petrochemical (SATORP) refinery in Jubail, a city in the Eastern province on the Persian Gulf coast of Saudi Arabia, and could potentially include adding a cracker unit.

The signing of the agreement is likely to happen early next week during an official visit by Saudi Crown Prince Mohammed bin Salman to France. Neither of the two companies involved wanted to comment. Saudi Aramco is the owner of 62.5 percent of SATORP while Total holds a 37.5 percent stake. The two firms have already been managing the operations of the 400,000 barrels per day SATORP refinery integrated with petrochemical output and have considered expanding petrochemicals production for the past few years.

In the fall last year, the French company said it was negotiating with Aramco to expand the SATORP refinery by more than a tenth. Both firms are also debating building a mixed-feed cracker and derivatives in Jubail close to the joint refinery. The SATORP refinery complex was launched in 2014 and it is considered one of the world’s most state-of-the-art plants for the production of plastics and fuels. Total’s business in the Kingdom that started its operations there in 1974, consists of four pillars – exploration and production refining chemicals, marketing services and trading and shipping.