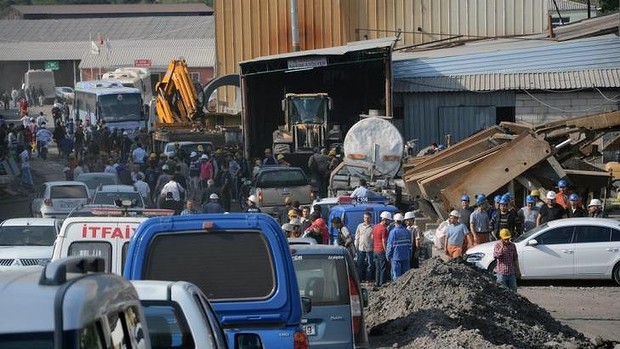 More than 200 coal miners were killed and many others were injured at an explosion that occurred Tuesday night at a mine in western Turkey.
Energy Minister Taner Yildiz said 787 people were inside the mine in Soma, south of Istanbul, at the time of the accident and 363 of them had been rescued so far.
Turkish authorities say the blast was caused by an electrical fault, making the lifts unusable and leaving hundreds of miners stranded underground.
The deaths were caused by carbon monoxide poisoning and the toll is likely to rise because some 200 miners are still trapped while their oxygen is running out.
According to the Turkish miner’s union president, Vedat Ünal,”every worker has a gas mask which provides oxygen. But we don’t know how long they will last.”
Thus, rescuers are pumping oxygen into the mine but their efforts are hampered by the heavy smog. Prime Minister Recep Tayyip Erdogan postponed a visit to Albania and will go instead to the Soma mine to show support and solidarity with the family of the victims.
Turkish company SOMA Komur Isletmeleri AS, which owns the mine, said the accident occurred despite the “highest safety measures and constant controls”
In 1992, a gas explosion at a mine in Turkey killed 263 workers near the Black Sea port of Zonguldak.