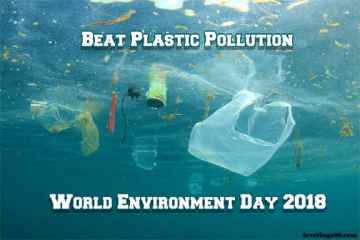 5 June was marked by the United Nations as World Environment Day. The day was established in 1974 to promote “worldwide awareness and action for the protection of our environment.” Each year, the World Environment Day is focused around a theme that brings awareness on a particularly pressing environmental concern. The theme for 2018 is ‘beating plastic pollution’. UN Secretary-General António Guterres urged all people to say no to single-use plastic products and warned that increasing levels of plastic waste were getting unmanageable, saying “every year, more than eight million tons end up in the oceans.”

While plastic has many valuable uses, the world’s population has become over-dependent on disposable plastic, which has severe environmental consequences. Around the globe, 1 million plastic drinking bottles are purchased every minute. Every year we use as many as 5 trillion disposable plastic bags and about 50% of the plastic we use is single use. Almost one third of the plastic packaging that we use escapes collection systems, which means that it ends up polluting the environment.

Plastic leaks into the oceans, smothers coral reefs and threatens marine wildlife. The plastic that ends up in the oceans can circle the Earth in one year and persist for as many as 1,000 years before it disintegrates. Therefore, this year’s World Environment Day provides an opportunity to look into the ways we can do to combat plastic pollution such as bringing your own shopping bag to supermarket, refusing plastic cutlery, pressuring food suppliers to use non-plastic packaging or picking up any plastic you see next time you go for a walk on the beach.