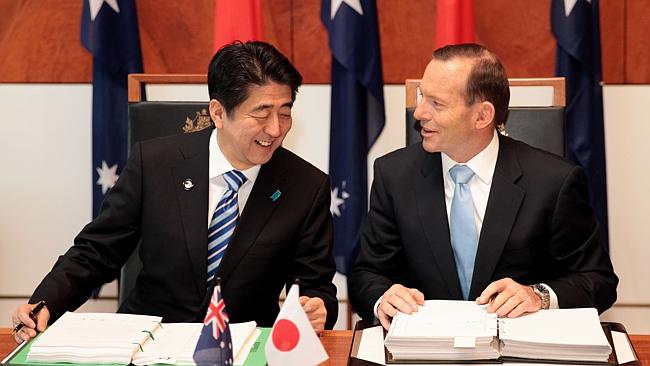 Japan’s Prime Minister Shinzo Abe and his Australian counterpart Tony Abbott signed a free trade and, perhaps more importantly, a defense cooperation agreement two days ago (8 July). While Tokyo’s relations with Beijing or Seoul have deteriorated since the 2012 elections, the Japanese government has been seeking closer ties to Australia at all levels. There may in fact be a more strategic partnership taking shape between Australia and Japan: Abe has quietly relaxed Japan’s regulations governing the export of military equipment while pushing a resolution to revise its pacifist doctrine as defined by Article 9 of its pacifist constitution. These developments are all taking place while Japan has had on-going territorial disputes with China, particularly, but not exclusively, where the Senkaku Islands are concerned. In June, ahead of the 8 July signing ceremony, Japan’s Minister of Defense Itsunori Onodera said that a cooperation agreement was to be signed dealing with equipment and defense technology.
Japan’s defense sector buildup should also be seen in light of Tokyo’s needs to secure reliable supplies of Chinese rare earths, given that it is the main importer of these elements from China. Japan’s militarism will undoubtedly compel it to find new rare earth sources and processing facilities. Given the long-term unfavorable state of China-Japan relations, Tokyo can never be sure that Beijing retaliates tomorrow by treating its rare earths as strategic. For example, the electronic equipment that controls every aspect of the submarine’s weapon delivery systems from guidance to lasers, to actuators, to electric motors, needs actual ‘rare earth’ magnets. Japanese industry will surely become ever more interested in Australia’s rare earth producing potential and companies such as Alkane Resources have already formed close partnerships with Japanese end users and magnet producers such as Shin-Etsu. Japan’s highly influential trading houses ‘Soshas’ such as Marubeni and Mitsui have invested heavily in Australian mining resources in general. However, in so doing, the Japanese companies have faced an increasingly tough competition from the Chinese, who are also eager to secure access to Australia’s resources. While Alkane is dealing with Japan, Arafura Resources has attracted interest from Chinese magnet producers and there is no sign that Australia will limit Chinese investment or trade, despite the defense and trade agreements with Japan.