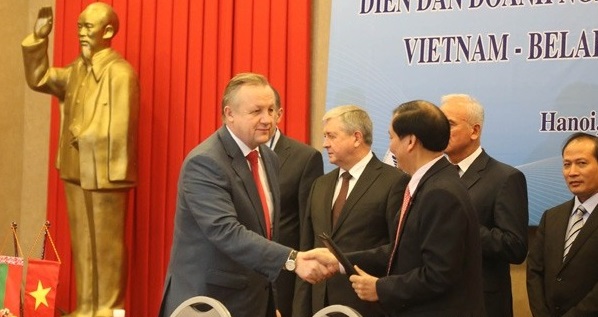 Belarusian Potash Company (BPC) has finalized talks on two three-year memorandums with Vietnam on the shipments of potash fertilizers. The documents were signed in Hanoi on the sidelines of the Belarusian-Vietnamese business forum on 8 December. Yelena Kudryavets, Director General of Belarusian Potash Company, pointed out that Belarus is the main supplier of potash fertilizers to Vietnam. “Today we are number one in Vietnam with our quality, promptness, logistics, perseverance and partners,” she said.

Ms Kudryavets did not specify any exact figures due to the complicated macroeconomic situation in the global markets. She said that the company “is preparing a long-term foothold for selling our fertilizers to this very promising country”. She expressed her belief that the company’s “sales to this country will only grow larger” since, following the memorandums, both parties are now obliged to cooperate more and deepen mutual relations. BPC has contracted to ship approximately 300,000 tons of potash fertilizers to Vietnam this year. “We hope that these volumes will grow larger every year,” added the Director General of Belarusian Potash Company.

The Minsk-based Belarusian Potash Company supplies and exports potash fertilizers to Africa, the Asia-Pacific, Central and South America, China, Europe, India, and the United States. It also gradually builds up its operations in developing Asian economies such as Cambodia, Laos, Myanmar, often also in collaboration with Vietnamese partners, added Yelena Kudryavets. BPC was considered half of the global potash market duopoly, along with Canadian Canpotex. Until the BPC marketing venture failed in 2013, the two companies jointly controlled about 70 percent of global potash exports.