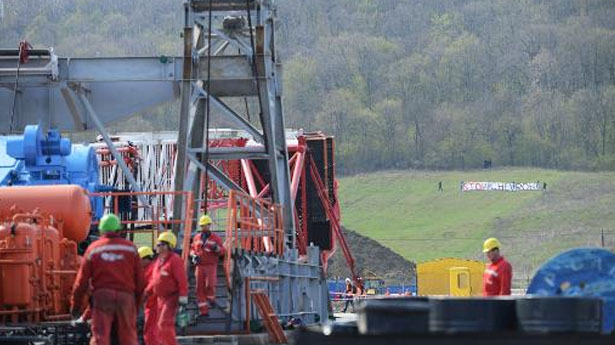 Chevron Co. has started its first shale gas drilling operations in Romania. The exploratory drilling is made at a site near the village of Silistea, Pungesti commune in Vaslui County.
The U.S. giant Company had suspended twice its drilling operations in Eastern Romania due to social protests by environmentalists over the risks of water pollution that may be caused by shale gas explorations.
Chevron holds three shale-gas exploration blocks in the south-eastern region of Dobrogea, near the Black Sea.
Some experts believe that natural gas from shale rocks could improve Europe’s energy security, generate new revenues for governments, create jobs and stimulate economic growth.
In the United States, shale gas provides reliable, affordable and clean energy. Romania is believed to have substantial undiscovered natural gas resources from shale formations.
Many countries believe that shale gas has the potential to provide them with greater energy security, growth and jobs. Fracking, or hydraulic fracturing, is a technique used in the extraction of gas from shale rock and has been extensively used over the last 60 years – it is estimated that more than 2.5 million wells have been fracked worldwide.