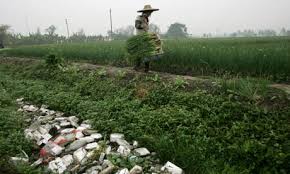 China being the world’s biggest producer of rice and wheat is looking to curb its use of pesticides and chemical fertilizers that have largely contributed to the contamination of large swathes of the country’s arable land, which in turn threatened its ability to keep up with domestic food demand. As a result, almost 20 percent of soil samples that were taken from Chinese farmland contain excessive amounts of heavy metals and chemical waste. It has been found that in central Hunan province, to name just one example, more than 75 percent of the rice fields contained harmful particles.

China is the biggest consumer of pesticides in the world but almost 75 percent of them contaminate both water and land. According to Bi Meijia of the Chinese Agriculture Ministry, the country needs to be determined in its control of the use of fertilizers and pesticides. Thus, for example, Zhejiang province in the eastern part of the country intends to cut the use of nitrogen fertilizer by 8 percent in the coming three years. The whole China could then cap the growth in use of fertilizers and pesticides by 2020.

Yet, Beijing still aims to remain self-sufficient in its production of staple crops despite its move to control the amounts of fertilizers and pesticides. The country recorded a bumper grains harvest this year, with production up about 1 percent to more than 607 million tons marking the 11th consecutive year of increasing output. China’s grain output is constantly observed by global markets as any fall in its production could kick off demand for imports. The country is planning to import any products in short supply on the domestic market but on the other hand, it is not expected that Beijing will increase inbound shipments substantially.