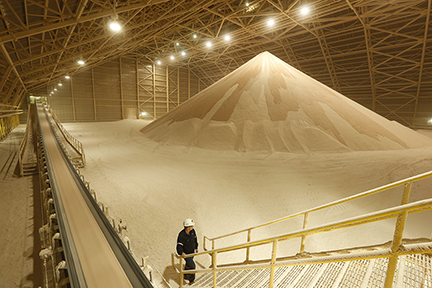 In 2014, potash prices have stayed relatively calm despite an early drop to 287 USD per ton at the beginning of the year. The market has been fairly depressed for muriate of potash (MOP) compared to sulfate of potash (SOP) throughout the year, which has had an impact on companies across the potash market.

According to Niall Murphy of Potash Ridge Corporation “the impact of weak capital markets for resources was compounded somewhat by the depressed market for MOP, which we believe impacted our perception in the marketplace as a potash development company. As a result, one of our primary goals for 2014 was to aggressively educate the market on the merits of SOP as a more favorable product than MOP, given its premium quality and the fundamental supply deficit in SOP markets today”. Mr. Murphy also stressed that the lack of capital for firms as well as the cautious approach of investors to the Canadian market have been challenging for resource companies. Despite the fact that there has been a shock caused by the drop in grain prices in 2014, Mr. Murphy considers year 2014 to have been a lot calmer than 2013 when there were many issues with the Russian potash trader Uralkali.

In 2015, the fate of potash should be linked to that of oil. This potash-oil connection stems from the fact that potash is tied to corn, which is in turn tied to oil. Thus, lower oil prices can have a negative influence on corn which harms the use and demand of potash. Mr. Spencer Churchill, an analyst with Paradigm Capital, argues that “low grain prices, negative farmer sentiment and lower oil prices (negative for corn) are the biggest issues near term”. He forecasts that supply and demand will stay fairly steady, with prices going up slightly higher depending on how drastic the shutdowns at Uralkali will be. Uralkali, Russia’s potash giant, went through flooding at one of its mines, which triggered off speculations that potash prices could rise.