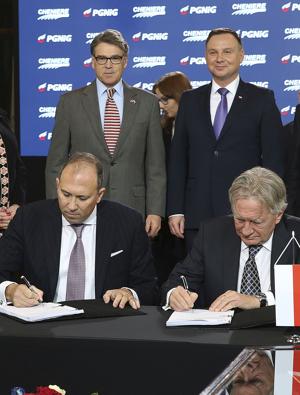 Washington has praised the recent 24-year deal to deliver US liquefied natural gas (LNG) to Poland as a signal for Europe on its urgent need to decrease the continent’s dependence on Russian resources. The agreement is the second multi-decade deal with a US company signed in two months. It comes as Poland is trying to diversify its gas imports away from Russia. In October, Polish company PGNiG finalized a similar deal for 20 years with the US-based Venture Global LNG for delivery of up to 2 million PNG.

“This is a signal across Europe that this is how your energy future can be developed, the security of the country, the diversity of supply – this is a great day for Europe,” US Energy Secretary Rick Perry said at a signing ceremony in Warsaw with Polish President Andrzej Duda. Warsaw is also considering importing from Norway and Qatar. Currently, two thirds of Poland’s gas are supplied by Russia. Poland’s state-run PGNiG said that it had finalized a two-tranche agreement for LNG deliveries from the Texas-based Cheniere Marketing International, amounting to a total of 40.95 billion cubic meters of natural gas.

“This deal will provide Poland with energy security,” commented Polish President Duda, adding that the agreement reflects “a real transatlantic partnership.” The 24-year deal is due to take effect in 2019, three years before Poland’s current deal with Gazprom for 10 billion cubic metres of natural gas per year is to end. PGNiG CEO Piotr Wozniak added that the terms of the deal with the US firm included “a competitive price, are fully satisfactory”, although no value for the contract was provided. Stressing that two further deals were planned, Mr. Wozniak also poited out that “we want to build a full supply portfolio.”