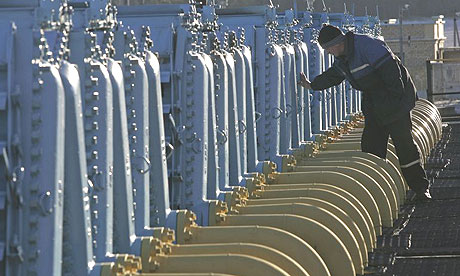 Over the last few weeks, we have witnessed several major steps that Russia had taken in order to fortify its revenues from selling its natural gas elsewhere than Europe. After signing a major 30-year multi-billion dollar deal with China, which will provide Moscow with an alternative market for its resources, Russia has started to turn its attention to India to expand its hydrocarbon market as part of the proposed 9-billion Turkmenistan-Afghanistan-Pakistan-India pipeline. Both Moscow and Brussels now appear to be rather uncomfortable with one another and also about the future of the mutual gas links, yet the difference is that only one of the two parties is doing something to boost its national security interests.
The European Union has been talking about decreasing its energy independence on Russia for quite some time. The discussion gets hot with every new challenge that this mutual relationship brings and it is also when “efforts” to deal with this issue seem to intensify. The truth is that the EU28 does too little. Most of what Brussels does is sketching ideas and plans but intangible solutions might not help sort out Europe’s gas-based vulnerability vis-à-vis Russia. The last big idea came from Poland’s Donald Tusk who called upon EU member states to create and join in an energy union, in which the decisions on where to buy gas and oil would come jointly for the entire EU by a common executive body. Whether the idea is good or bad does not really matter, because most of EU’s thoughts of diversifying the club’s energy portfolio unfortunately still remain on a drawing board.
Stephen Tindale of the Centre for European Reform writes that at the European Summit in March this year, EU leaders were right to postpone discussions of climate targets but wrong to postpone action on reducing Europe’s dependence on Russian gas. Generally, EU leadership formulated the need for diversification in five points: energy efficiency, alternative sources of gas, renewable energy, coal and gas with carbon capture and storage as well as nuclear power. None of these, however, will be attained cheaply. In fact, any serious attempt to diversify the third of EU’s gas needs that comes through the pipes from Russia would be very costly. Now, when the economic recovery is still very fragile and Europe’s Southern economies have just got rid of their debts, such big expenditure plans cannot be easily conceived of.
Another problem is time. Creating new energy infrastructure for the continent would require a lot of time and, in fact, likely much more of time than dealing with the Ukrainian crisis. In the field of alternative energy, the fastest measure that could be implemented in a very short time period could be import of liquefied natural gas (LNG). This was more problematic back in March but, in a recent development, the US government has finally allowed exporting the US-produced ultra-light oil to foreign markets. LNG is not available only from the United States, though. Qatar, for instance, could also be interested in trading with Europe. Quite naturally, an increase in using liquefied gas would imply investment in LNG-friendly infrastructure, but priority could be given to those EU member states which are dependent on Russia the most (Czech and Slovak Republic, Hungary, and Finland).
Moreover, ensuring that new pipelines transporting non-Russian gas from the Caspian Sea are constructed would also be a step in the right direction. Contracts to build such pipelines – like the Trans-Adriatic pipeline starting in Greece via Albania to Italy or the Trans-Anatolian pipeline for Kazakhstan’s oil – have been signed already, but the construction is still pending. A complete brush-up of the energy infrastructure that de facto concerns a third of European gas demand would undoubtedly take a lot of time and money. Yet, despite various obstacles outlined above, the EU leaders might finally want to start taking some firm, meaningful, and relatively inexpensive steps to demonstrate Russia that Europe is indeed committed to diversify its energy policy away from Moscow’s dominance. Negotiations with the governments of the United States or Qatar on possible LNG imports would exactly constitute such a step in the right direction. The beginning of the construction of a Trans-Anatolian pipeline from Azerbaijan to the Mediterranean coast of Turkey or a Trans-Adriatic pipeline from there to Italy could be another one. Unfortunately, EU leaders seem to have stopped their policy of decreasing energy dependency on Russia somewhere in the phase of brainstorming ideas.