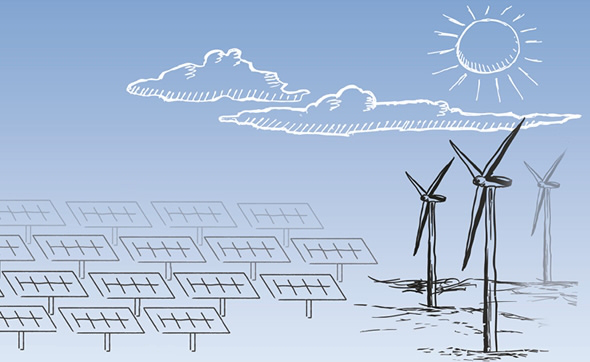 It is expected that investment in renewable energy sources might account for up to two thirds of the 7.7 trillion in investment forecast for constructing new power plants by 2030 as decreasing costs make it more competitive with fossil fuels. About 50 percent of that investment should happen in Asia – the region where power capacity is likely to go up the most. Given this, the world’s carbon dioxide emissions may achieve their peak already by the end of 2020. Yet, at the same time, annual investment in greener technologies such as solar, wind and hydropower already surpassed fossil fuels for the first time in 2011. Other predictions suggest that the share of fossil fuels in power generation will decline to 46 percent from current 64 percent. New Energy Finance estimates that 5,000 gigawatts of power generation capacity will be added globally out of which about 1,000 gigawatts will be covered by oil, gas, and coal-based plants mostly in developing countries.
Among renewable energies, solar power is anticipated to attract most attention. It will likely top green energy solutions with solar power capacity expanding in Asia where solar-powered plants will exceed coal and gas combined. As Milo Sjardin of BNEF commented, “the period to 2030 is going to see spectacular growth in solar in this region, with nearly 800 gigawatts of rooftop and utility-scale PV added”. As he concluded, this would be among major drivers of economic growth. Together with wind power, solar plants will increase their combined share of global power generation to 16 percent in 2030 compared to 3 percent in 2013. Despite the boom in green energy sources, traditional gas will likely survive with its installations growing thanks to lower pollution compared to coal and to important discoveries of shale gas in past few years.