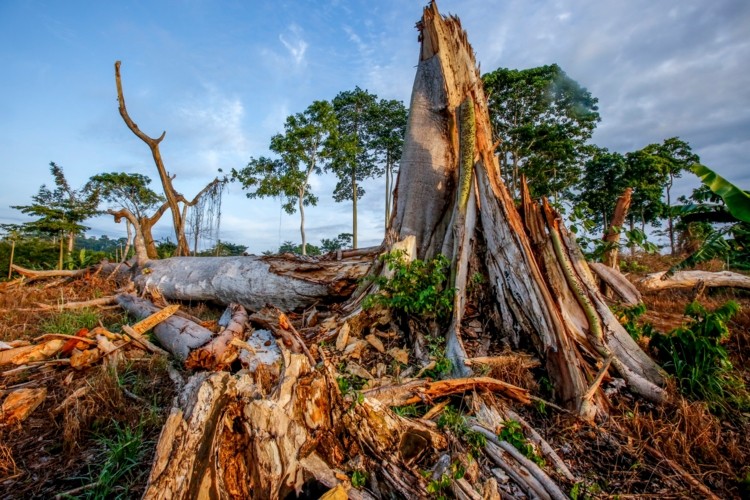 Up to 58,000 square miles of forests are being lost to deforestation every year, which is contributing to climate change and the loss of habitats for millions of species. Deforestation is being directly caused by activities such as illegal logging, agricultural development, mining and infrastructure projects – but there are reasons behind these activities which are often overlooked.

Poverty is one of the most significant indirect reasons causing deforestation across Africa – and it is increasing. The population across Africa is growing steadily, and because the continent has a large land area with ample forests, Africans are using it to farm as a means of securing their food security while lifting themselves out of poverty. However, they are using tools that are not as sophisticated as those used in developed countries, which leads to farming being inefficient, and so farmers are using up a lot of land in order to produce enough crops. At the same time, because of a lack of fertilizers, the land is also becoming exhausted, so more land is needing to be cleared.

As a result of both of these factors, every year, farmers are expanding the area of land they are farming so that they can produce enough crops to make enough money. This process called ‘shifting cultivation’ is one of the main causes for deforestation. However, although over 90 per cent of all deforestation across Africa is being caused by agricultural development alone, there are other industries responsible too, such as the logging and mining industries, which have both been increasing due to an influx of Chinese loggers and miners operating in Africa.

Ghana, Cameroon, Cote d’Ivoire and the Democratic Republic of the Congo are among a number of African countries working with the European Union to improve forest governance. Over the past few years there have been a number of global initiatives that have been launched in sub-Saharan African countries. Some of the most important include the Reducing Emissions from Deforestation and Forest Degradation Programme (REDD+) and the African Forest Landscape Restoration Initiative (AFR100).

There is also the Cocoa and Forest Initiative (CFI) which was signed last year under the patronage of Prince Charles. Ghana, Cote d’Ivoire and several other countries around the world – most recently Colombia – have come together with certain chocolate companies to commit to restoring forest areas that have been degraded by cocoa farming and improve sustainability along the cocoa supply chain. This is an extremely important initiative because, in Ghana, approximately 15 percent of deforestation is being caused by cocoa farming, as it is Colombia’s main export, providing livelihood to a major of the population.

Forests are critical to managing climate change, yet deforestation is causing up to 12 percent of global greenhouse gas emissions. Recently, a group of scientists argued that tackling deforestration was as important as eliminating the use of fossil fuels in global efforts to preventing the world’s climate rising by more than 1.5oC but it is not being focused on enough. Forests can be revived so reforestation projects are crucial. There are a lot of land area in Africa which means Africans have a responsibility to plant trees in place of the forest area that is being lost to farming and other industries as well. In terms of dealing with poverty, if farmers see they will get a better price for the number of crops they are producing on less land, they won’t feel the need to continue extending their farms. This is why shrinking the poverty gap should be a main priority.

‚How Poverty Is Causing Deforestation Across Africa‘ – Expert Comment by Obed Owusu-Addai – Chatham House / The Royal Institute of International Affairs.