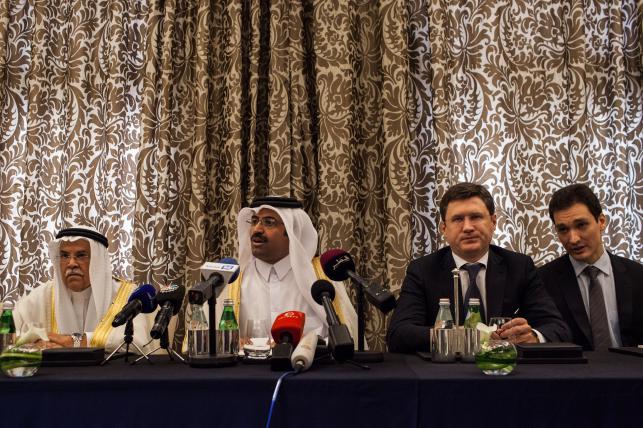 Four major oil producers decided to freeze their production at January levels if other big energy exporters join, in response to which oil prices fell somewhat from their highs on Tuesday (16 February). Qatari Energy Minister, Mohammad bin Saleh al-Sada, commented that this move would hopefully stabilize the energy market, which has been suffering from oversupply. Analysts commented that this step might finally bring the oil market back to balance, although global inventories remain at their near record highs and are likely to dampen prospects of rising prices.

According to Dominic Haywood of Energy Aspects, the decision to freeze output might not have a huge impact on supply/demand balances ”simply because we were oversupplied in January anyway”, stressing that “we’re just even more oversupplied now”. He added that although the impact might not be big, “it’s a step in the right direction. But you’ve still got a huge amount of inventory that is going to weigh on the price for a long time and we need to clear that, because it’s going to kill any rally.” Saudi Arabia’s oil minister Ali al-Naimi, who attended the meeting of oil giants in Doha, said that the OPEC’s next steps would be assessed in the upcoming months.

In the past 20 months, oil prices have fallen by more than 70 percent, which was driven by record-high production and the cartel’s decision not to cut output. Cheap oil has had a negative impact on the finances of oil-rich countries making governments cut spending, increase deficit forecasts and often push for politically unpopular reforms. According to the insiders familiar with the situation in Iran, Tehran will likely join the club of those willing to freeze or cut their oil output once the country has reached its pre-sanctions production levels.