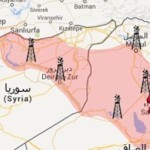 Following ISIS’s seizure of Syrian regime’s important oil and gas fields, the extremists deepened their strike at heart of the Syrian economy at the end of May by capturing two phosphate mines outside the ancient city of Palmyra. The loss of the mines marked the end of one of the last major sources of income for the Syrian government. Although the group will likely be unable to monetize raw phosphate, the capture of a new source worth “millions of dollars”, as a pro-ISIS Twitter account tweeted, is a major blow to the Assad regime.
It all naturally started with oil. ISIS took the Arak and Al Hail gasfields to add to the oil resources they had already controlled in the east of the country. Both fields are crucial to supplying the part of the country that is not in the hands of rebel groups. Gas is very important for electricity generation and the seizure of both gasfields has negatively contributed to already wrecked electricity supply, which has been harshly affected by overloads, sabotage, and fighting. To better illustrate the dire situation on the ground in Syria, very often people there die of electric shocks from damaged cables. On top of that all, the Assad regime is allegedly buying oil from the Islamic State, which only fuels allegations that the government is helping ISIS out by financing them and by weakening other rebel groups.

After most of the Syrian economy had literally been dismantled oilfield by oilfield, extremists pushed government troops out of the Khunayfis phosphate mine. The production of phosphate was among last exports generating flow of foreign currency into the war-torn economy. Moreover, the phosphate sector was among very few industriesin the country that in fact improved this year. According to Syria Report, approximately 345,000 tons worth $35.3 million were exported this first quarter, up from only $18.2 million in the same quarter in 2014.However, even those sectors that are relatively improving are doing much worse than prior to the conflict. There is no production capacity, no imports or exports, and people no longer have their savings, so there is virtually no consumption or investment.
As the war is progressing, all parties in the conflict – from rebel groups through Kurdish militias near the border with Iraqi Kurdistan to the Assad regime – have been trying to squeeze as much as possible from what’s left of the country’s resource base. In a Wild West-like environment, all are trying to benefit from the resources still available in Syria. In some parts of Syria, locals have tried to extract usable products from crude and raw resources by primitive methods, such as draining from pipelines or storage tanks, which often led to environmental and health degradation in their communities.
Syria was once an important trade partner to Europe. Although its oil resources have never been large enough and thus important enough for the international community to wage a war, the country used to attract international oil and resource companies like Royal Dutch Shell. While Syrian oil resources and rebels’ revenues from them are small by international market standards, they are sufficient enough to sustain them andenable them to exercise power on a regional level as well as finance their operations.

The politics of resources is generally complicated and even more so in conflict zones. Syrian resources are simply at heart of the ongoing civil war and their degeneration is set continue due to war damage, lack of maintenance and the severing of links to international markets. In Iraq, whose oil and gas resources are much more abundant and which suffered less war damage, the inefficient electricity and energy sectors are still crippling the economy. Rebuilding Syria, or at least parts of it, will therefore first of all mean reconstruction of the country’s resource base to provide the legitimate government with a source of income to rebuild the war-torn country while supplying the Syrian population with very basic resources needed for survival.