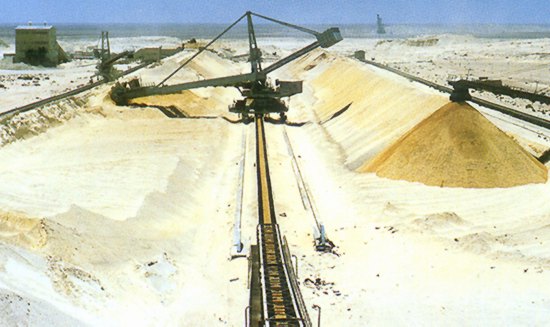 Natural gas is by far not the only area in which the European Union is significantly dependent on the outside world. When it comes to phosphate rock, the twenty eight EU Member States are almost entirely dependent on imports. Phosphate is an important commodity for the agricultural sector and food security which puts both sectors at risk especially when the future supply of this vital commodity might be disrupted by a variety of factors.

Analysts agree that the world is likely approaching the so-called “peak phosphorus” – the point where the global production of phosphorus reaches its climax. Naturally, this implies that the worldwide reserves of phosphorus remain static but market dynamics should make it possible for the reserves to increase over time. Exploration and offshore projects are currently taking place in New Zealand, Saudi Arabia, and Namibia. Despite this development, the demand side of the industry is getting increasingly crowded which means more competition and higher prices for the EU.

The world’s major exporter of phosphates is Morocco including Western Sahara followed by Iraq, China, Algeria, Syria, Jordan, South Africa, the United States, and Russia ranked according to the size of their reserves. A quick glimpse on this group is enough to tell that phosphate imports have been and will continue to be extremely prone to geopolitical risks. Part of Morocco’s phosphate comes from Western Sahara, which has been a disputed region of north-western Africa since 1970. Naturally, the presence of this important commodity in this territory does not help solve the conflict.

The EU imports most of its phosphate rock from Morocco, which implies cherishing mutual political ties to the highest level. Making the whole relationship even more complex are also the problematic issues that Brussels has with Rabat – migration and fisheries. The dependency on Moroccan phosphate will likely deepen as the rest of the “phosphate group” countries are losing political and security ground. The Arab Spring that swept throughout the Arab world has considerably undermined the assurance of investors in the industry as well as the regularity of exports. Moreover, the world’s second biggest reserves are currently fought for by the Islamist State, the Iraqi government, and Kurdish separatists. The same uncertainly naturally holds for Algeria, Syria, and to some extent Jordan.

The remaining phosphate exporters include China, South Africa, the United States, and Russia. Here, Russia can be likely excluded from the shortlist of potential sellers at least until the new “cold conflict” between Brussels, Washington, and Moscow is over. When it comes to China and the U.S., they accounted – together with Morocco – for about 80 percent of the world’s production in 2011. Yet, China and the U.S. both need their phosphate for their own agricultural sectors. When it comes to South Africa, in contrast, the price of its phosphate rock is reportedly prone to an increase due to higher transaction and transportation costs. Given this breakdown of the phosphate group, the dependence of the EU on Morocco is likely to ultimately increase in the future, though the ongoing stalemate over the status of the disputed Western Sahara may pose some challenges to the security of commodity imports.

Although phosphate reserves are not going to run out any time soon, it does not mean that the EU should sit on its laurels. It takes many years to prepare new resources for active mining and the prospect of having more and smaller phosphate producers can fragment trade in the future. Moreover, the current supplier countries increasingly opt for trade barriers, such as export quotas. Overall, the entire business is getting scent of growing resource nationalism and protectionism. Another dangerous trend is vertical integration where mining firms tend to produce fertilizers, phosphoric acid, and other derivatives of phosphate at the same time. As a result, phosphate imports to the EU might increasingly swap from the phosphate rock to ready-made phosphate fertilizers, which might also soon become subject to trade restrictions.

The way out of this increasingly complex and politicized environment is not easy. The ability of the EU to influence future developments in the industry will depend to a large extent on whether the international community is governed by a few major state actors or rather a bigger number of smaller actors playing alongside the states. Under each of these scenarios – multi-polar, multilateral or fragmentation – the possibilities for the EU are diffuse and uncertain.