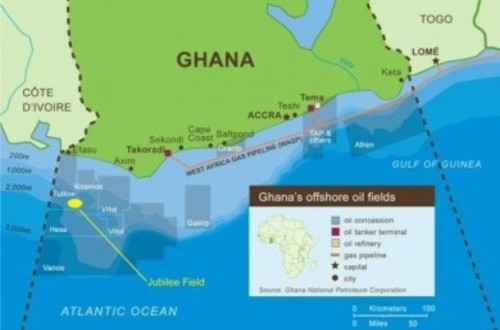 It can get increasingly expensive for Ghana to seek arbitration in a dispute with Ivory Coast over the oil-rich basin in the Atlantic Ocean. The International Tribunal for the Law of the Sea will rule on Saturday (25 April) on the request of Ivory Coast for a moratorium on drilling in the basin. The dispute is part of a broader maritime border dispute between Ghana and Ivory Coast.

Even though many analysts predict that the ruling will in the end be in Ghana’s favour, the legal proceedings have already prevented opening an oil and gas field worth $4.9 billion next year. In any case, the ruling is expected to cause further troubles to already battered Ghanaian economy. “Even if Ghana wins on the boundary eventually, as most people expect, they stand to lose two years of revenues which they badly need,” Anaïs De Meulder of global risk advisory firm Verisk Maplecroft explained. A final decision is likely to come out in 2017 or 2018.

The Africa Centre for Energy Policy estimates that the loss incurred by Ghana for the two-year period could be as much as $6 billion. In contrast, there is almost nothing that Ivory Coast could lose. So far, there have been ten rounds of talks trying to solve the dispute over the oil-rich basins that Ivory Coast says partly lies in its territory. All of them failed. Following the precedent, the maritime court based in Hamburg will probably rule in favour of Ghana. The ruling is also unlikely to redraw the customary equidistant maritime boundary.

Ghana started drilling oil in 2010, which boosted economic growth rate to almost 15 percent. This year, the economy is predicted to grow 3.9 percent due to falling commodity prices (the country produces gold and cocoa) and economic instability caused by budget deficit and the weak currency.