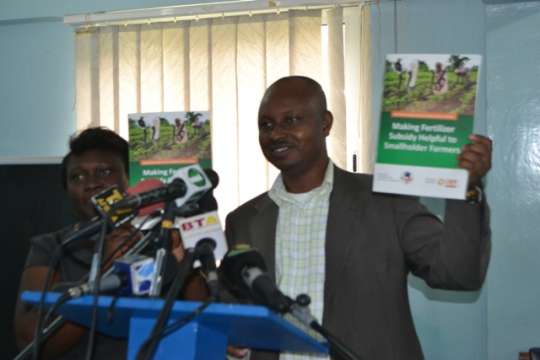 A recently published report by the Northern Ghana Civil Society Organizations platform on agriculture has concluded that the government’s subsidized fertilizer program is losing its relevance. The program targeting the poor was launched nationwide in 2008 to support small farmers covering three types of inorganic fertilizer, sulphate of ammonia, urea and compound fertilizer. The report says that the percentage of the price of subsidized fertilizer has declined from 50 percent to 21 percent between 2008 and 2015.

According to the study, there have been delays in supply of the products due to suppliers’ dissatisfaction with government’s credit worthiness. As a result, subsidized fertilizers are often inaccessible due to the imports of non-standardized products as well as limited distribution in the country’s regions. According to John Nkaw of SEND-Ghana that represents the Northern Ghana Civil Society Organizations, “making fertilizer subsidy helpful to smallholder farmers” sought to highlight factors affecting the programs and proffer possible solutions. The report suggested that the government should spend 10 percent of the nation’s GDP on the agricultural sector to ensure greater food security.

The report further urges the government to boost its private-public partnership to support the agricultural sector as a means of generating revenue to supply fertilizer and maximize its allocation. Analysts also proposed the government to expand monitoring and supervision operations of the Departments of Agriculture, as the entire sector should be the government’s number one priority. Currently, the subsidy program rotates during the distribution season since many participants pointed out to smuggling of fertilizer in the neighboring countries. Therefore, there have been voices urging the government to better enforce laws governing the program.