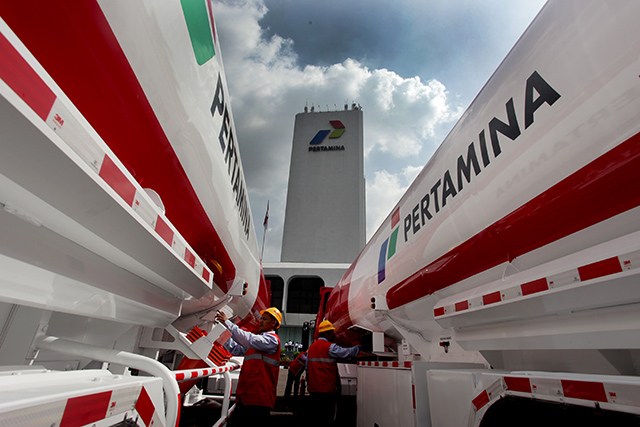 Phosphateprice has talked with Dr. Deendarlianto Aan, the Director of the Center for Energy Studies, Gadjah Mada University (UGM) in Yogyakarta, Indonesia, about the Southeast Asian country’s oil and gas sector, once seen as a cornerstone of its economy, that is now in a slump, even as the Indonesia’s appetite for energy soars.

Hit by a drop in global prices, changing regulations and competition from neighbors that are proving more attractive to international energy companies, Southeast Asia’s biggest economy is dealing with a decline in oil revenue and steadily rising fuel imports. With a sharp slump from almost 6 percent of Indonesia’s gross domestic product to only about 3 percent last year, the country’s oil and gas industry is sounding alarm bells over the decline of the sector while the whole economy was growing at a 5 percent clip and the government was embarking on a vast infrastructure roll out.

Phosphateprice : The Indonesian government sometimes complains that not enough investment is coming into this sector of Indonesian economy because of different obstacles. When it comes to investments into the oil and gas sector in Indonesia, what are some of the key challenges?

Dr. Deendarlianto: Well, first of all, we have the problem with the deep-sea drilling because this entails high costs and thus demands lots of investment. Earlier, we used onshore oil fields but now the possibility for onshore drilling is quite low, so we must move offshore. And, as you know, from an economic or business point of view, offshore technology is quite high-cost.

And the second problem is that from the perspective of potential investors, regulations in the oil and gas sector in Indonesia are not so comprehensive and transparent. This applies, for example, to the issue of “cost recovery”. Basically, in Indonesia, if you want to invest your money to extract oil, you get an area concession where you can explore, produce and you can invest your money but the problem comes when the government is to pay back the cost – we call it “cost recovery”. Of course, if you invest billions of dollars into drilling and do not find oil and gas, you will lose this money – you do the oil exploration at your own risk.

Phosphateprice : Is there another reason why foreign businesses in the oil and gas sector are hesitant to invest in Indonesia?

Dr. Deendarlianto: Yes, well, they are now also faced, much more than in the past, with a strict control from the government and the public over their activities. And now also certain individuals are trying to push the Indonesian government to force the foreign companies to provide some privileges for our national energy companies, such as Pertamina and others.

Phosphateprice : Can you be more specific? Are you referring to the 2009 Regulation forcing foreign companies to process the extracted mineral resources in Indonesia before they are exported out of the country?

Dr. Deendarlianto: Yes, this regulation stipulates that you can’t export raw mineral resources out of Indonesia without also processing these inside the country. And I think that this is a good rule because it is only if all the high-value raw mineral materials, such as copper, gold, boron, are processed in Indonesia that our government can really benefit and collect enough taxes.

Phosphateprice : This regulation applies to all mineral resources but what about the regulation that applies specifically to the oil and gas?

Dr. Deendarlianto: This area is still ruled by the Law No. 22 of 2001 regarding Oil and Natural Gas (the “Oil and Gas Law”) but some people want to revise it. For example, for the gas field management, we use the unbundling system now, like the one that is used also in Europe, which implies an open access to the facilities. For example, in the past, only when you had a facility, you could transport the gas to the market but now if you have natural gas, you can transport it by using facilities owned by other companies, which means that you have to pay a kind of toll fee for that. But this is not so good because if I have the power, I can push the gas producer to sell to me and I will find the transport – ok, can I use your pipe to transport the oil to this customer? And I will pay the toll fee, which means that there is the extra cost for the transportation.

Phosphateprice : So, how have the new rules of the game changed the position of Pertamina, the once-privileged national oil-and-gas company?

Dr. Deendarlianto: In the past, before the 2001 Regulation, Pertamina was the regulator, which meant that when Texaco or Chevron came to Indonesia, they signed a contract with Pertamina and sold all their oil and gas to it. But now Pertamina has become a sub-contractor, meaning that they are now operating at the same level as Texaco or Chevron. Therefore, Pertamina now essentially has to compete with foreign companies, although it does not, quite naturally, have either the financial resources or advanced technologies as Texaco or Chevron.

So, the thing is that since Pertamina is losing this competition with foreign multinational companies, some powerful groups try to push the government to renegotiate the rules to provide more support to Pertamina, for example, by giving it more concession areas and grant it more other privileges. This issue of empowering Pertamina and having the oil and gas sector more tightly regulated by the government, not the market, is still being discussed.

Phosphateprice : But these tendencies go very much against the process of liberalization of the oil and gas sector in Indonesia, much like the ill-conceived oil subsidies.

Dr. Deendarlianto: Yes, the oil and gas sector in Indonesia has been liberalized but still some obstacles remain, such as the oil subsidies that have been only partially removed in recent years, although the price of oil in Indonesia is still a half of the price in global markets. The Indonesian government should subsidize health and education rather than oil or gas.

Also, there are lots of reports that some people try to sell illegally the subsidized oil to foreign countries to make large profits. Since the price of oil is quite low here, much lower than in neighbouring countries, so some individuals try to transport it mostly by smaller ships to sell it at a double price to Singapore, Malaysia or elsewhere without reporting it and paying taxes to the government here. Moreover, if we could completely remove the subsidy, then people will be encouraged to move from driving cars to use more public transportation.

Phosphateprice : Now back to the new regulations that have recently been adopted by the government that, as some oil executive say, have further reduced the attraction of investing in exploration in Indonesia. For example, earlier this year, the government announced it was ending a system under which it reimbursed contractors for all costs associated with exploration and production. Any new deals will see them bear all the costs of production. In this context, what are your recommendations to the government?

Dr. Deendarlianto: Firstly, to separate the oil rules from the gas rules because the business characteristics are different and the government should regulate the gas transportation using the gas price. Ok, for example, the government will give a concession to a foreign company in one area and you should build the facility, of course, and you should sell the oil according to the government’s rules. The foreign companies only have contracts with the government to extract the oil or gas, not to transport and sell it – because we have the upstream part, which is to produce oil and gas, and downstream part, which is to transport and sell it.

For the gas, government should not apply the unbundling and open access. Because if you apply an open access like now and your company has natural gas, you may simply decide not transport to me this month, so this month, nobody will get the gas. So, I think foreign companies should build their own pipelines and related facilities because then they have to pay for their construction by themselves and thus will have an incentive to use it. If the companies use the open access model like now, they control the price because they decide when they will sell the gas and when not and by that they control the price. The open access model is used in the US and Europe where the price depends on the supply and demand.

Phosphateprice : And you don’t want to follow that model used in the US or Europe?

Dr. Deendarlianto: No, this is because the Indonesian economy and population is unbalanced, thus we still need some government regulation for oil and gas. Basic Indonesian law stipulates that the extraction of the nation’s oil and gas resources must be done in such a way that generates the maximum benefit and income for the state, and contributes to the greatest prosperity of the people. Thus, country’s oil and gas should make people here rich, not to make the people become poor. We would like to have more prosperity for the people. Even though, up until now, it has been only a handful of people who have become rich from oil and gas. You can see it when you go to the Riau or Pekanbaru regions in Sumatra, the people around the oil fields are rich but 20 kilometres away, you can find lots of poor people.

Maybe we can also start using the open access model like in the US and Europe, but only once Indonesian economy is more balanced, especially across different regions. In Indonesia, when you go to Papua or Bali, Jakarta or Sumatra, the conditions are starkly different. Not like when you go to South or North Karoline or Florida, the conditions there are rather the same or similar. This is why we need the government regulation for the gas sector. As for the oil sector, we need the real time measuring of the production, not only on a day-by-day basis. And we should also open the data for people to see what is the real production of these companies and what is their cost-recovery and so on.

Phosphateprice : Dr. Deendarlianto, thank you very much for the interview.