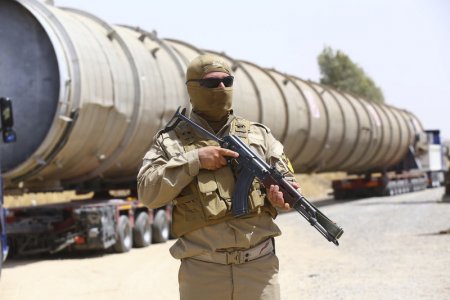 Iraq’s militants seized four small oil drilling sites when they swept through the north of the country last month. Now, they have started selling crude oil and gasoline from the four oilfields to finance their newly declared “new caliphate of the Islamic state”. The Islamic State has taken over the field of Najma and Qayara in the vicinity of the city of Mosul in north, while in the south two other oilfields were overrun – Himreen and Ajil – near the city of Tikrit. The oil drilling sites that fell prey to the Islamic State militants are rather small compared to the country’s giant fields near Kirkuk and Basra, which are under Kurdish and central government control. Most of the Islamic State-held oilfields are not operational. Kurdish officials estimate that militants have control over about 80 oilfields.

Yet, the monopoly over fuel in the territory that militants have seized gives the Islamic State leverage over other armed Sunni factions who could threaten its dominance in the north of the country. Iraq’s authorities say that in recent weeks the gunmen have transported oil from Qayara to be processed in Syria into low quality gasoline and gas oil. Then, militants plan to transport it back to Iraq and sell. Bigger shipments of crude are also sold via smugglers to Turkish traders at discounted prices of around 25 USD per barrel. Mr Husham al-Brefkani, head of Mosul provincial council’s energy committee, said “we have confirmed reports showing that the Islamic State is shipping crude from Najma oilfield in Mosul into Syria to smuggle it to one of Syria’s neighbours”. He added that the Islamic State was making millions of dollars from smuggling.