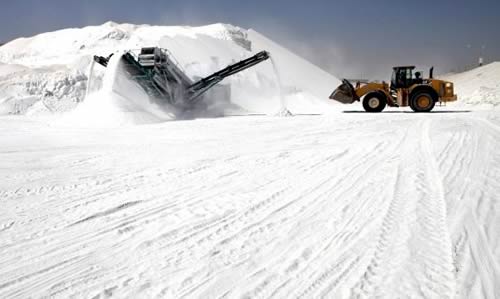 Israel Chemicals Ltd. (ICL) has signed long-awaited deals to supply potash to buyers in China, the world’s largest consumer of the fertilizer. Analysts believe that the contracts might be an indication that the plummeting commodity prices could be ending. ICL is going to ship 700,000 metric tons at prices that are very similar to other deals China has made recently. For example, Belarusian Potash Co. signed a deal with Beijing two weeks ago to sell potash at $219 per metric ton compared to the 2008 highs of $950.

According to Gilad Alper of Nessuah Brokerage in Petach Tikva, the ICL’s contracts with China are “a sign of relief”. “It puts a floor on prices, which at one point looked like they could have been a lot worse. There were whispers that prices could have fallen below $200, which would have been a disaster for the industry,” Mr Alper said.

The series of deals between China and the world’s major potash companies is expected to ease the global oversupply of unsold potash that has caused serious problems for mining companies. Chinese demand is, however, still weak, which is being sustained by low prices. Mr Alper said that the prices agreed upon by ICL are “still about 40 percent less than they were last year” and added that “obviously they will still have issues in terms of profitability, but the volumes are decent and that should stabilize share prices.”

ICL is an Israeli chemical giant developing, producing and marketing fertilizer, metals and other special chemical products. The company primarily serves three markets, agriculture, food and engineered materials. ICL produces approximately a third of the world’s bromine and it is the world’s sixth biggest potash manufacturer.