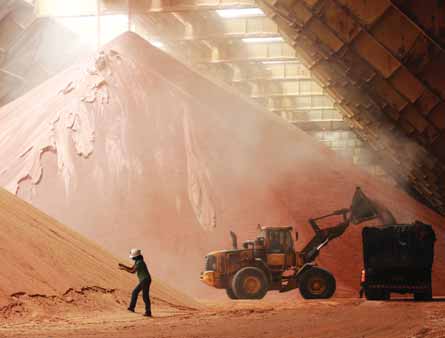 Mosaic Co. said last week that it was optimistic about potash prospects in 2017. The company has for long been negatively impacted by sluggish farm economy, as a result of which the Plymouth-based company reported third-quarter 2016 net earnings of $39 million, down from $160 million in the third quarter of 2015.

Mosaic’s CEO, Joc O’Rourke said that global inventories had decreased, leading to a more stable pricing. “Both potash and phosphate prices strengthened in the quarter as pent-up demand materialized,“ he said. Mr O’Rourke further added that “fertilizer fundamentals are improving, albeit slowly“ and hinted that the current quarter would likely reflect a more standard seasonal slowdown.

Mosaic expects that the industry will significantly improve next year. Mosaic’s net sales in July-September of 2016 were $2 billion, which is more than $2 billion less when compared to the same period last year. Operating earnings during the quarter were $70 million, down from $246 million in 2015. The weaker performance was mostly driven by lower potash prices and lower phosphate margins and was offset by higher sales volumes and cost savings.

The company also announced earlier that its shareholders would receive a quarterly dividend of 27.5 cents per share. At the same time, Mosaic said that it could not guarantee this price in the future. On top of the challenging market conditions, Mosaic will have to pay $60 million as a fine because of a huge leak of contaminated water through a sinkhole in Florida at its fertilizer plant. The company is also working with authorities on the cleanup, treatment and restoration of the site.