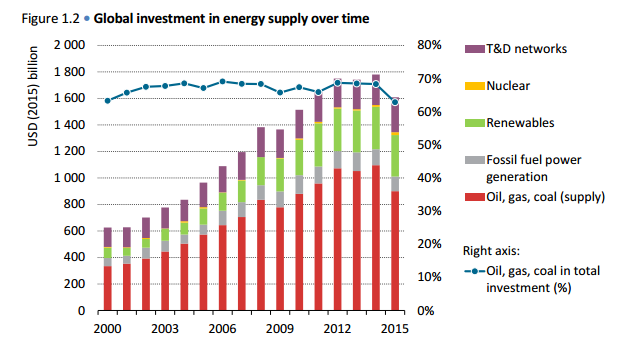 According to the World Energy Investment 2016 report of the International Energy Agency (IEA), the world’s investment in energy went down by 8 percent in 2015 as a result of cheap oil and gas as well as cost falls in the industry. Most of this fall was accounted by the US where the sector has been negatively affected by low prices, a boom in shale and cost deflation.

The IEA’s report further said that global energy systems were undergoing “a broad reorientation” promoting low-carbon and green energy sources and greater energy efficiency. However, the agency said that investment in these must be boosted more if the objectives agreed on in Paris last year were to be achieved. To that end, IEA’s chief, Fatih Birol, commented that “We see a broad shift of spending towards cleaner energy. Government measures can work and are key to a successful energy transition. But while progress has been achieved, investors need clarity and certainty from policymakers. Governments must not only maintain, but heighten, their commitment to achieve energy security and climate goals.”