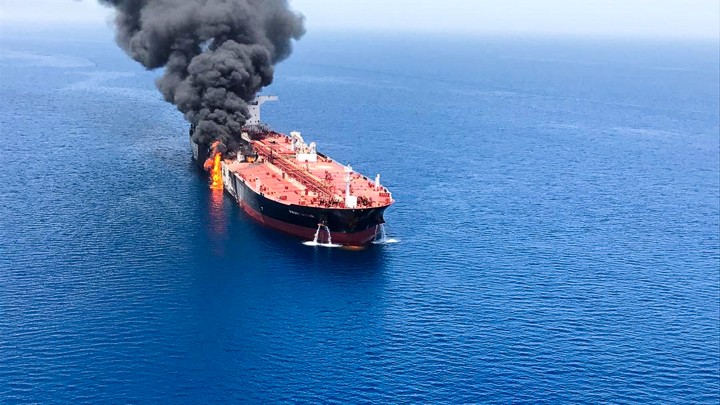 The US accused Iran of executing attacks in the Gulf of Oman, which left two tankers ablaze, which further intensified tensions across the region. The EU has called for “maximum restraint”, as the world would not be able to manage a major confrontation in the Gulf. Iran described the attacks as suspicious while the US blames Teheran for orchestrating the attacks, claiming it has strong evidence that Iran had undertaken the operation.

“This is based on intelligence, the weapons used, the level of expertise needed to execute the operation, recent similar Iranian attacks on shipping, and the fact that no proxy group operating in the area has the resources and proficiency to act with such a high degree of sophistication,” said US Secretary of State Mike Pompeo. The two vessels exploded in the early morning last Thursday (13 June) after traveling around 25 nautical miles off Iran’s southern coast. The Norwegian-owned Front Altair ethanol tanker and Japanese-owned methanol tanker Kokuka Courageous were struck by several explosions.

“Taken as a whole, these unprovoked attacks present a clear threat to international peace and security, a blatant assault on the freedom of navigation and an unacceptable campaign of escalating tension by Iran,” continued Pompeo, claiming that the attacks are the counter-reaction to international sanctions. The US also called for the UN Security Council to review on the attacks. Meanwhile, oil prices have surged at the prospect of an open conflict at the Hormuz, through which around 15 million barrels of crude oil worth hundreds of millions of dollars transit every day. We are in a dangerous moment in the region with this emerging pattern of attacks,” senior analyst with International Crisis Group (ICG) Elizabeth Dickinson said and added that “any miscalculation or misunderstanding risks a spiral toward more direct confrontation.”