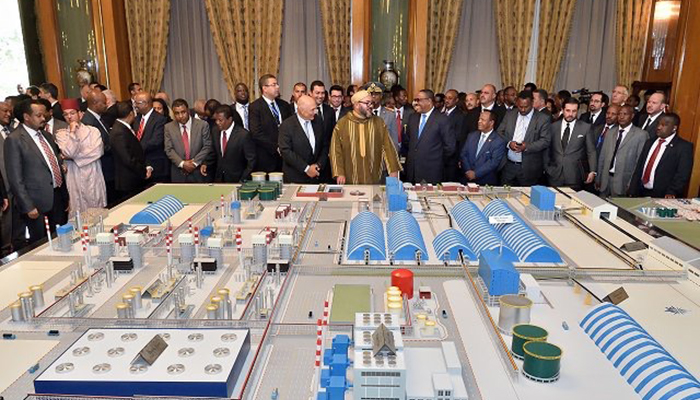 Morocco and Ethiopia will build a world-class fertilizer plant to the tune of $3.7 billion, which is projected to have an annual production capacity of 2.5 million tons, in Dire Dawa industrial zone in eastern Ethiopia. King Mohammed VI of Morocco and Ethiopia’s Prime Minister Haile Mariam Dessalegn oversaw the official signing ceremony of this mega project in Addis-Abeba on Saturday (19 November). This deal signed between Morocco’s Office Cherifien des Phosphates, or OCP, the world’s largest phosphate exporter, and Ethiopia has been hailed as one of the largest joint ventures on the continent concluded between two developing economies. The deal is the most substantial among a number of cooperation agreements inked on the occasion of the King Mohammed VI’s first visit to Ethiopia.

Morocco’s OCP, which is 95 per cent state-owned, stressed this project would create one of the world’s largest fertilizer facilities that will help the east African country reach self-sufficiency. “This industrial Megaproject will require an investment of $2.4 billion in its first phase in order to produce 2.5 million tons/year of fertilizer by 2022,” said the CEO of Morocco’s state-owned phosphates company, Mostafa Terrab, in a speech at the signing ceremony and added that “This will make Ethiopia self-sufficient in fertilizer, with a potential for export. An additional investment of $1.3 billion is expected by 2025 to reach a total capacity of 3.8 million tons/year of fertilizer to support the growth of local demand.”

Mr Terrab also said that the world-class fertilizer plant, which will consist of an integrated complex of fertilizer production, industrial and storage units, reflects Morocco’s commitment to south-south cooperation in Africa. The new plant that is projected to start producing fertilizer in mid-2022 is part of OCP’s future strategic development plan to meet local fertilizer needs. According the OCP’s CEO, this plan is based on the complementarity of the respective natural resources available to Morocco and Ethiopia.

The construction of this mega fertilizer pant is widely expected to be a game changer for Ethiopia’s agriculture sector, which currently accounts for 45 per cent of the country’s GDP and 90 percent of its exports. While Europe uses 150 kg of fertilizer per hectare of wheat and 300 kg per hectare of corn, the corresponding figures for Ethiopia stand at mere 57 kg and 34 kg respectively. The low use of fertilizer in Ethiopia is partly because all of it has so far been imported while, at the same time, these imports were hampered by the Ethiopian government’s acute shortage of foreign currency.